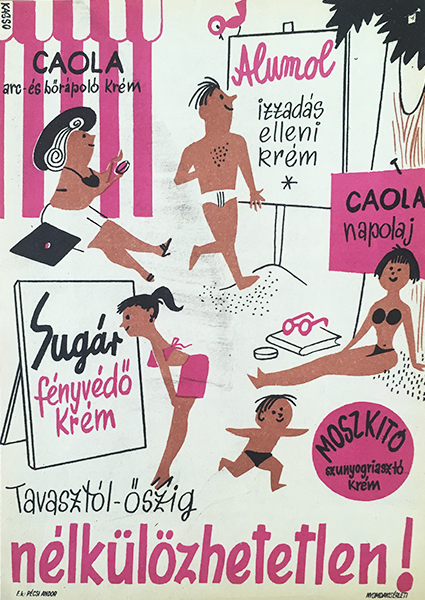 Caola - A must have from spring till autumn

The cartoon-like fun design incorporates numerous products of the brand in one image that captured a happy moment on the beach: anti-mosquito lotion, sunscreen, deodorant, UV cream, face- and skin lotion. Each product appears next to a character who is associated with that certain good. The author of the design was a famous caricaturist and graphic designer  He worked for famous magazines like Vasárnapi Újság (~Sunday Magazine, the most influential illustrated newspaper of the time) and for political-satirical newspapers, like Ludas Matyi. He was a pioneer of Hungarian animation film making, alongside with Gyula Macskássy and John Halas. He was known by his very humorous attitude. Vivid colors, funny characters and humorous scenes characterize his designs .