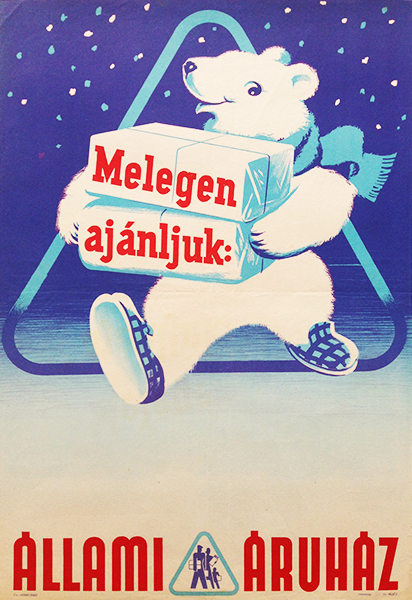 ’We warmly recommend: State Department Store’ – commercial poster from the 1950s. Its designer is unknown.

In the beginning of the 1950s, artistic freedom was under constraint by political dictatorship in Hungary, in accordance with other Eastern European countries in the Soviet Union. The norms of Socialist Realism were obligatory, which meant that poster designers had to meet the requirements of socialist content and a realist manner. However, the system soon started to soften and after 1956 Socialist Realism lost its absolutism in the country.

This poster was created most probably in the middle of the decade, around 1955. It is a fresh, light-hearted composition with a cartoon-like figure of a polar bear in chequered blue list slippers and a blue scarf. It holds white boxes with the first half of the slogan appearing in red (‘We warmly recommend’). The figure is stepping forward on the snow-covered or icy ground, in front of a dark blue, snowing or starry background. The figure is placed in front of a triangle in a light and dark blue transition. This graphical element makes the composition more modern. The script of ‘State Department Store’ appears at the bottom in red. Obviously, the humour lies in the fact that the poster captures a winter scene and the slogan says that the advertised chain is warmly recommended.

The humorous character of this design is in a contrast with the typical socialist realist compositions of the time which employed mostly a heroic, figurative portrayal. It is also interesting that although the creator is unknown, the artists designed another poster for the State Department Stores in pair with this one. The other piece depicts the polar bear in a summerlike environment, in front of the warmly coloured background with the sun, sitting in bathing suit on the yellow triangle, holding a purse and wiping sweat from the head. Its slogan says: ‘In heat we recommend: State Department Store’. Consequently, it seems that the artist was commissioned to design a poster for the summer and for the winter period that year. Both pieces are delightful and modern designs, so they can be connected to one of the main tendencies in international poster art of the era. Cheerful commercial posters were created in Western countries as product advertising came to the front in the 1950s. Similarly to them, these State Deparment Stores advertisements are clear and playful works, showing a unique tone in Hungarian poster art during the period.