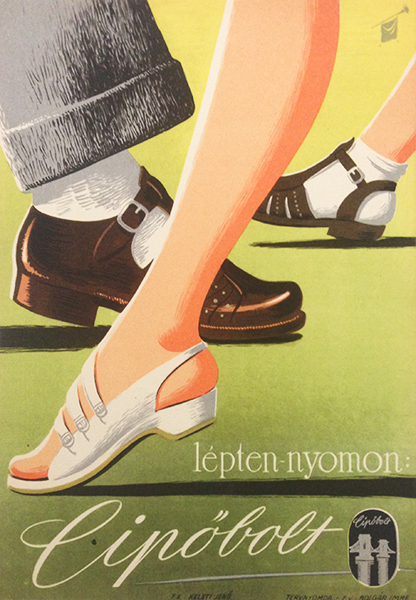 At every step: Shoe store

Tram poster from the 1950s advertising shoe shops. In the Socialist period it was quite common to advertise a certain type of product instead of advertising a brand. One example is the Rubber shoe poster but there are many. he phenomenon was the result of the scarcity of goods in the bad economic state of the country and the stagnation caused by the lack of real market due to the employed socialist economic ideology. There were hardly any brands, but everything was nationalized by the one-party state, so competition was absent. But the political leadership decided to have commercials, not to be out of something the West was in. Commercials, pulled out of their original capitalist context, lost their original function. Hats could be bought in the hat store, electric appliences in the electric store and shoes in the shoe stores.

This poster is a very vivid piece thanks to the green colour of the background. Three different type of shoes are depicted 'in use'. The slogan and the composition is in harmony: the three feet wearing sandals and shoes are stepping and the slogan says that there is a shoe store at every step.