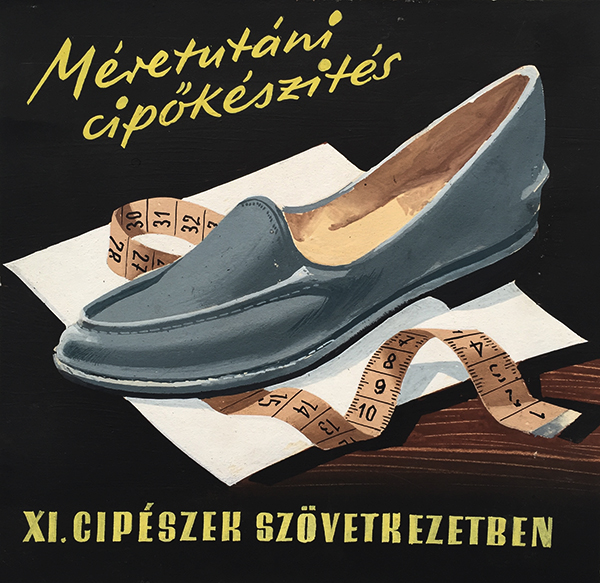 This original hand-painted design was created for a commercial ad, advertising custom shoemaking in the 11th Trade Union of Shoemakers. The artwork was created by Bertalan Altmann. Altmann often created poster designs for state celebrations and anniversaries in the late 1950s. He designed modernist compositions during the time when the visual language of the official propaganda was Socialist Realism. Although he employed the socialist content, it didn’t have the typical realist portrayal all the time.

The design here also has quite a modernist look. It depicts a light grey moccasin in the centre athwart, placed on a white paper with a tape measure loosely thrown on a wooden surface. The typograpy appears above and below, in yellow. The simplified, stylized, decorative portrayal reminds of the former Art Deco style, which was one of the most important tendencies of the interwar period in Hungarian and international poster art. The composition bears the characteristics of another former tendency, the German Plakatstil (Poster Style). The so-called “object posters” (deriving from the German term Sachplakat) consisted of a realistic representation of the advertised product with hardly any other elements and a clean, spectacular typography. Lucien Bernhardt invented the style in 1905, but it had a huge international impact, so on Hungarian poster art, too. Márton Tuszkay was the first one to introduce the new approach in advertising in the 1910s, but the tendency was present for many years later as well. This artwork is a fine example for that.