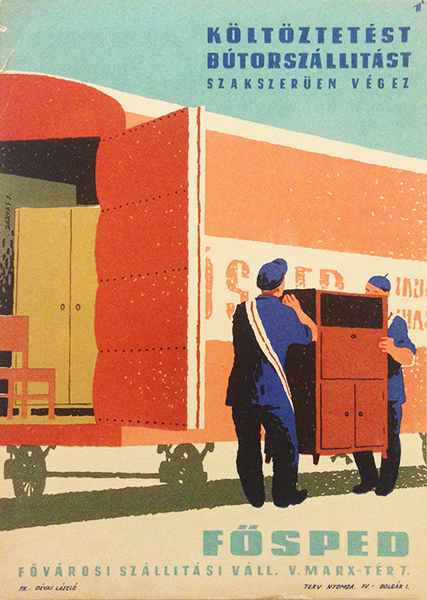 Fine, tears along the border.

Tram poster from the end of the 1950s for Fösped, the Metropolitan Carriage Company (FÖSPED). The text on the top says the company makes moving, furniture carriage in a professional way and takes full responsibility.

The composition shows the workers in action in their uniforms. They are carrying a large cupboard and putting it in the van which already has some furnitures in it. There is a very similar double tram poster from the artist, Sándor Darvas for the same company. The design is not the typical Socialist-realist style, but it still has some elements of that period. The decorative pastel colours of this poster were not used on the socialist realist posters. The depiction of the happy workers was a must which is also apparent on this piece, however the way the FÖSPED poster pictures them has nothing from the character of the realistic hard working worker figure who gazes into the future. These characters here are more cartoon-like and much nicer, however they do not have the real cartoonish character of the late 1960s.