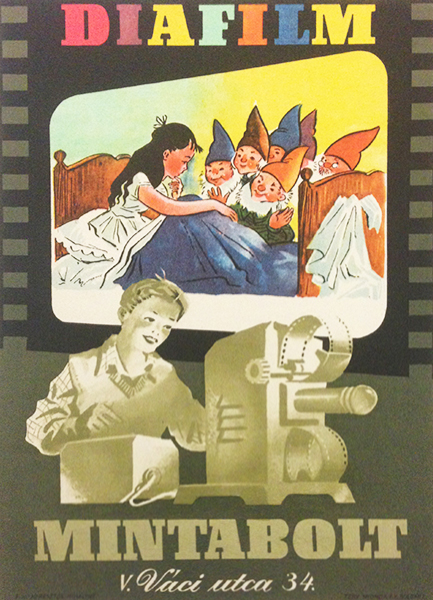 Tram poster of the showroom for filmstrips.

The genre of filmstrip was born on the turn of the century. It was very popular in Hungary and the local production started in 1913. Initially the filmstrips were used for educational purposes. After the second World War the filmstrip department of the Hungarian photography company (state owned of course as everything during Socialism) produced propaganda filmstrips. At the beginning there was a textbook attached to the filmstrip but soon it was replaced by subtitles. The production of cartoon filmstrips started in 1953 which became extremely popular by the 1960s and 1970s, the time before the spreading of television and after a while the word 'filmstrip' meant the same as cartoon tales for the public. Numerous Hungarian and foreign cartoons were published in that period.

The composition of this work shows a young boy handling the filmstrip projector. Above him Snowhite and the seven dwarfs can be seen on a filmstrip. The composition is very typical of the 1950s. The way the young boy is depicted and the colours of the poster were common characteristics of the socialist-realist style.