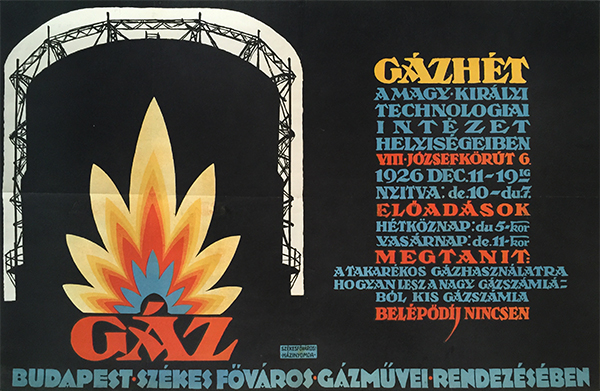 Commercial poster from the 1920s which advertised the "Gas Week", a promotional event, organised by the Budapest Capital City Gasworks. The designer of the poster is unknown, but a probable candidate would be Marton Tuszkay.

The 1920s brought a lot of changes into life. The most important public services and public transportation became ordinary to the population, but while first they were properties of private enterprises, they were bought by the capital city for communal property around the turn of the century. The gas service was got into the control of Budapest in the 1910s, that was the time when the Budapest Capital City Gasworks was created.

Hungarian poster art was also experiencing changes and innovations. This was the time when advertisements became an independent service of economy and commerce, and big companies employed its tools more and more. The antecedent tendencies were appearing already around the turn of the century, but the commercial graphical design started to develop suddenly in the 1920s and thus it could gain a position in the world of graphical art. Organising great fairs, economy-themed exhibitions and promotional events was an average tool of improving the economy, and the advertisements of these events became important representatives of the commercial graphical design of the period.

As it can be read on this poster, the "Gas Week" was oganised "In the premises of the Hungarian Royal Technologic Institute - VIII. district, József Boulevard 6. - between the 11th and the 19th of 1926, December. Opened: from 10 am until 7 pm. Lectures on weekdays at 5 pm, on Sunday at 11 am." The advertisement also claims that the Gas Week "Teaches you to the economic use of gas - how the gas bill can go from big to little." These events were free to attend, as it is cleared on the poster as well.
As it was typical of the commercial designs of the age, there is a lot of information on the poster, appearing in a long srcipt. On this piece the details are placed on the right side of the poster, in a typographic design in yellow, blue and red colours and decorative forms. The left side shows a skillful graphic design of a gaslight appearing above the accent of the 'A' letter in the word 'GÁZ' which means gas in Hungarian. Behind the gashlight the black background shows a silhouette of an industrial gas container which also gives a decorative visual effect for the design. The name of the organising company is written at the bottom of the poster in blue.

The design is an example of the fine commercial posters of the era which could find new ideas and could become perfect tools of advertising.