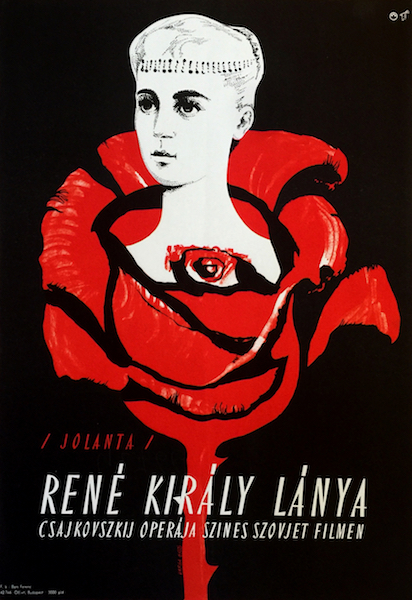 Yolanta is a 1963 vintage Hungarian movie poster designed by Gyozo Varga. The poster was made for a Soviet movie adaptation of Tschaikovsky's opera.

King René's Daughter (original title: Kong Renées datter) is a Danish verse drama written in 1845 by Henrik Hertz. It is a fictional account of the early life of Yolande of Lorraine, daughter of René of Anjou, in which she is depicted as a beautiful blind sixteen-year-old princess who lives in a protected garden paradise. The play was immensely popular in the 19th century. It was translated into many languages, copied, parodied and adapted. The Russian adaptation by Vladimir Zotov was used as the basis for the 1892 opera Iolanta, written by Tchaikovsky, with libretto by his brother Modest Ilyich Tchaikovsky. (source: Wikipedia.org)

The poster was made for a Soviet movie adaptation of Tschaikovsky's opera titled Iolanta, which was released in 1963.

The poster depicts a Yolanda, in a rose wearing a rose on her chest herself.