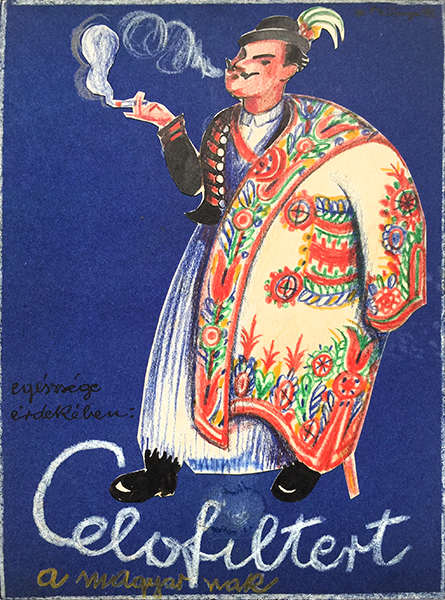 For the sake of their health, Celofilter cigarette paper for Hungarians

Hungary had been producing cigarette since 1865. The intention to develop less harmful cigarette products appeared quite early, around the turn of the century. However, the process was slightly slow, as the first filtered versions – as we know them today – were created only in the 1960s in the country. This didn’t mean that any kind of alternative methods were not used before. In the first years of the 1900s several ways were discovered to reduce the nicotine level of cigarettes, but some methods could make the products taste horrible, so those procedures were shut down soon.  The other way was to insert a filter into the cigarette stick itself, which could prevent a percentage of the damaging substances of the smoke from getting into the body of smokers. This method was initiated in the early 1930s, when several brands started to utilize this technique. The material of the filter was first simply cotton-wool, which didn’t have many actual benefits, so much the more symbolic significance. Later cotton-wool was combined with 8 layers of cellulose for a double filter in the cigarettes of the ‘Senator Celofilter’. The brand was the most popular one of the filtered cigarettes during the period. The name ‘Celofilter’ came as a short version of ‘Cellulose filter’. This material was more effective in its function, still smokers of today could taste the difference. The appearance of the new product was warmly welcomed in the contemporary media. For instance, a popular newspaper, Népszava, informed about the new brand like this on 25 November, 1934:

“On the way to healthy smoking

The way of development: deleterious substances must be eliminated. One possible solution: filtering the smoke.
When it comes to smoking healthily, we have to speak about the role of nicotine in smoking. Everyone knows that the danger of smoking is given mostly by nicotine. However, the conception that the joy of smoking is only provided by nicotine, is false. This is proved by the fact that the better and tastier the tobacco, the less nicotine it contains. [...] Our health only profits by the reduction of the amount of nicotine, which doesn’t influence the joy of smoking. Scientific researches detected that nicotine gets into the cigarette smoke practically on the whole, where it dissolves, together with the flue gases, water-dust and aromatic compounds. It is obvious from this important discovery that some ways must be found to divide poisonous elements of smoke from the not poisonous ones.

This was the basic idea of SENATOR CELOFILTER. After a long experimentation process, cellulose was managed to use as a filter in the cigarette stick. The gauzy material of cellulose has the ability to absorb the nicotine and the other flue gases of smoke, while letting through delicate components like aromatic substances. It is due to its abeam and fore-and-aft capillaries which were created by squeezing the material. This simple solution to filter cigarettes is an event of great consequence in the history of smoking. It is now clear what the responsibility of every smoker is: damaging agents possibly must be avoided to let into the body, in behalf of one’s health and condition. This is the goal of SENATOR CELOFILTER, too. It is hardly more expensive than any other cigarette stick today. It is available at the tobacco market for 46 fillérs, aesthetically packed in silver boxes.”

The poster maquette visible here was also designed to emphasize the positive aspects of the Celofilter as its slogan says: ‘For the sake of their health, Celofilter cigarette paper for Hungarians!’ The artwork was created by Zoltán Kónya in the 1930s. The early style of the artist derived from the charming and detailed Art Nouveau drawing style of the 1910s, while later several of his works showed the influence of the German Sachplakat. He also often used a delightful and humorous keynote and caricaturistic elements. This piece is an example of the latter fact, as it shows a humorous male figure in traditional Hungarian folkloristic clothing as he is smoking contentedly and galumph.

The figure is wearing a white shirt, a black dolmány, long, loose, white trousers, black boots, a black hat with some feathers and a long, colourful szűr. Dolmány was a type of a broadcloth jacket which reached only to the waist or just a little past it. It could be found in different forms and colours over a large part of the Hungarian-speaking regions, the one depicted here is black and it was decorated with red braids. The szűr can be seen thrown over the shoulder, revealing a typical practise of the time. The szűr was the most widespread form of coat-like outer wear in Hungary, practically a mantle. It is a part of the most distinctively local folk culture. Although it had sleeves, in most places the sleeves were not used as such but are sewn up one end, or in some places, the sleeves became shorter until they atrophied completely. It is captured richly and elaborately embroidered, which makes it typical and an especially Hungarian attire. Its tulip-like floral motifs can be linked to Kalocsa, the hometown of the famous embroidery patterns.

The figure appears against a flat, blue-coloured background. The artist used a mixed technique (paper collage, painting) to achieve the concentrated composition. As the symbolic figure of the Hungarian nationality is not placed into any kind of scene, it’s rather the cartoon-like drawing style and the sharp, sudden slogan that gives a funny character to the whole representation. The facial expressions of the figure and the unexpected temper of the slogan are in harmony with the famous Hungarian derring-do.

The decorative, stylized portrayal and the local character have a connection with the period of the creation as well: they are characteristics of the Art Deco style which was one of the most important artistic tendencies of the interwar era worldwide. In case of this piece, a bigger emphasis was put on the national aspect, so the work became a specific relic of the cultural and historical period of the country.