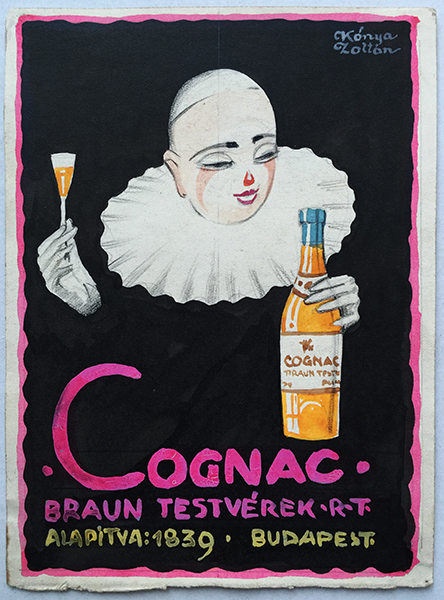 The formation of the Hungarian liqueur industry happened in the 19th century. The first companies came into being from former small royal leaseholds. The production was personally controlled by the company owners who often dealt with wine trade, spirit and vinegar production as well, to ensure financial profit. The same was true about the first Hungarian liqueur company which was founded in 1839 by Lajos Braun. The ‘Braun Liqueur Company’ became well-known soon and won several medals of international and local exhibitions. During the second part of the century, the company offered cognac, brandy and rum. After the death of Lajos, the entrepreneurship was lead by his sons and its name was changed to ‘Braun Brothers’. Around the turn of the century, a bigger and bigger competition started in the field of liqueur industry as many other fine brands emerged and gained popularity. However, Géza Braun composed a new kind of liqueur, called St. Hubertus, which gained a huge reputation and could maintain success for the factory. With further other products like the ‘Braun Brandy’ or the ‘Braun Cherry Brandy’, the company made it to the top in the 1930s and made a trade of 6 million pengős. The business passed from father to son until it was socialized in 1949. After the fall of the socialist regime, the ‘Zwack Unicum Company’ won the right of the production of St. Hubertus which is still one of the popular alcoholic beverages today.

This poster maquette was designed for the Braun Brothers Company in 1926, some years before the peak period. It is an elegant hand-painted and hand-drawn work from Zoltán Kónya. He depicted a humorous, fuzzy-like clown figure without a wig, holding a bottle of Braun Cognac in one hand and a glass full of the beverage in the other. The inscription appears below in lively purple, reading: ‘Cognac. Braun Brothers Joint-stock Company. Founded in 1839, Budapest.’

Although not so much is known about Kónya’s career, it is clearly visible that he was influenced by the German Plakatstil (Poster Style). This piece, together with further Kónya-artworks in our collection, is one of the evidences for that. The so-called “object posters” (deriving from the German term Sachplakat) consisted of a realistic representation of the advertised product with hardly any other element than a clean, spectacular typography. The inventor was Lucien Bernhardt who created the first object poster in 1905 for a competition and won by the stark simplicity of his design. He stepped away from Art Nouveau, the formerly prevailing style in poster art, and emphasized flat shapes, striking colours, bold letters, and stunning visual effects. The style had impacts on Hungarian poster art, too. Márton Tuszkay was the first one to introduce the new approach in advertising in the 1910s, but as this work proves, the tendency was present later as well.

Kónya applied the characteristics of the style well: he developed a strong contrast between the background and the depicted elements, highlighted the advertised product and even placed a lovely figure there to catch the attention of viewers and then direct it to the product held by the figure. The clown figure is represented in an artistic way as only the face in the typical white and red make-up, the wide white collar and the hands in white gloves are visible in front of a homogenous black background. This keynote can be paralleled with one of the poster of Sándor Bortnyik from 1915, created for Unicum, a famous Hungarian herbal spirit. There an invisible waiter pours Unicum from the bottle to a glass with his white-gloved hands in front of a black background. Both designs are based on the bold cut-out, the hand-motif separated from the human body which gives a grotesque character for them. However, while that Unicum poster is highly sophisticated, this maquette is a light-hearted piece.