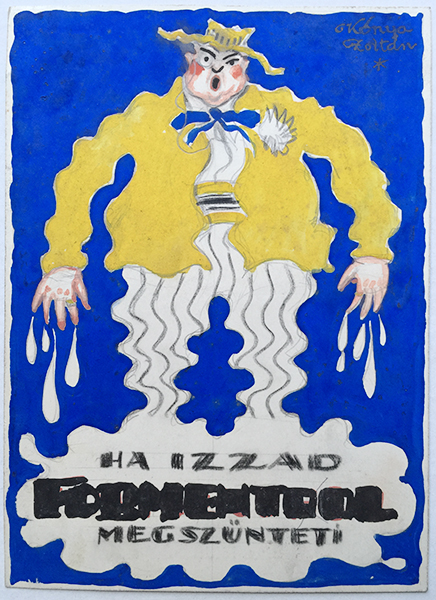 If you are sweating Formentrol will stop it

Spectacular poster artwork from the 1920s. The painted and drawn maquette was created for a commercial poster, advertising Formentrol, a product which claimed to ensure protection against sweating. The artwork takes us back to the time and points out interesting aspects of the period.

The interwar era was of great significance for the history of pharmaceutical industry in Hungary. Several big companies were founded or being developed and made it possible for the population to obtain more and better medication. Special cosmetic products also appeared that time, but were only available for the wealthier, while others used the basic hygiene methods.

There is another important aspect of the time: during the 1920s advertisement and commercial became an independent and important branch of Hungarian economy and commerce. Companies started to exploit the popularizing potentials of commercials and utilized the convincing power of graphical design for that. The genre of poster proved to be one of the most suitable ways to advertise, consequently countless more and more interesting commercial posters were created to amaze the viewer – the customer – of the time. Commercial graphic design was an important source of income for artists and Hungarian poster art enriched with numerous great works of fine designers.

This piece was created by Zoltán Kónya, a popular poster designer of the time. His first works appeared and gained attention in the 1910s. The early style of the artist derived from the charming and detailed Art Nouveau drawing style of the decade, while several of his later works showed the influence of the German Sachplakat. He also often used a delightful and humorous keynote and caricaturistic elements.

This piece is an example of the latter fact, as it shows a funny male figure melting into a puddle of sweat. He appears against a vigorous blue background, and the puddle, which replaces his feet in the picture, serves as the panel where the slogan is written (If you are sweating, Fermentrol will stop it). The figure is depicted to be standing face to face with the viewer, holding his arms aside his body while he has an annoyed facial expression. He is wearing white trousers with black stripes, a black belt over a bright yellow strip, the same yellow-coloured lounge-coat, a white shirt, a blue ribbon in the neck, and a yellow hat. He has a white complexion with a red blush due to the heat. His body seems to be dumpy and tubby. The representation is tricky and hilarious as the silhouette lines are wavering and fluctuant, picturing as if the figure was leaking.

The strong, rich colours, the flat, geometric shapes and the stylized portrayal identify the Art Deco style. Art Deco was an important style in international poster art all over the world, especially in Europe and America. It became one of the major tendencies in Hungarian poster art during the interwar period. The essence of this style was its decorative beauty. It was in a strong interaction with the contemporary popular visual culture, still also in connection with earlier artistic tendencies like Art Nouveau or folk art. Art Deco could be considered a certain taste that answered the needs of a certain social class, the so called gentry.

This piece, together with the advertised product, was also targeted at the upper social classes as they were the ones who could afford more luxurious hygiene items. The captured figure is a dandy, which is obvious due to his attire. However, the representation is highly humorous and satirical, by which the artist followed the traditions of the biggest Hungarian Art Nouveau poster designer, Géza Faragó’s attitude.

Thus the poster could be created for a bourgeois audience and could parodize them at the same time, in a brilliant way.