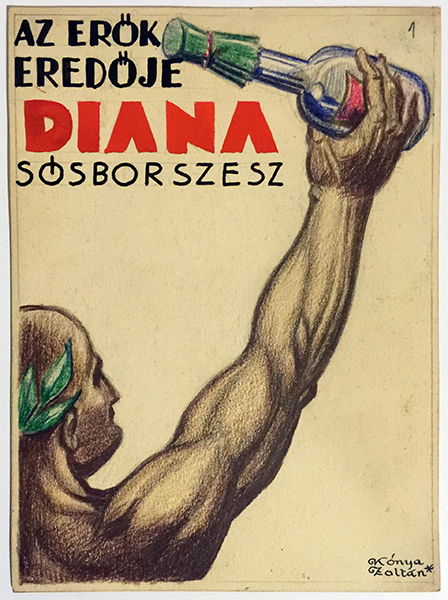 Rubbing alcohol was a popular product in Hungary around the turn of the 20th century. Wholesaler Kálmán Brázay introduced it to the country after getting acquainted with the panacea during his European tours. He developed his own version: he put plant oils and aromatic oils into alcohol and added some salty water to it. The substance could ease pain and freshen the body, so it was used for rheumatic problems, migraine, and sterilization. Soon other companies started to produce the panacea, such as Béla Erényi did so with the Diana rubbing water in 1907. The brand’s commercial campaign was so successful that it expelled Brázay’s entrepreneurship. The new company was growing and developing until the nationalization in the middle of the century.
(source: http://hvg.hu/)

This rubbing alcohol poster maquette was hand-painted and hand-drawn by Zoltan Konya around 1920. The early style of the artist derives from the charming and detailed Art Nouveau drawing style of the 1910s. Several of his works show the influence of the German Sachplakat, and others are often delightful and humorous. However, this artwork is a direct, narrative piece: a muscular male figure with bays on the head is depicted from behind as he is lifting his arm with a bottle of the Diana rubbing alcohol in the hand. The slogan says: ‘Diana rubbing alcohol. The source of power’.  Here Kónya’s aim was to represent this message with the design effectively and create the metaphor of strength. He applied a detailed graphical portrayal for the drawing, so he could highlight the muscles of the figure. By the symbolic motif of the bays and the gesture of the arm lifted up, the composition gets a heroic character, too. The strong shapes and lines enhance plasticity, by which this portrayal could be connected to the figurative depictions of Mihály Biró and the Hungarian Avantgarde artists around 1919.