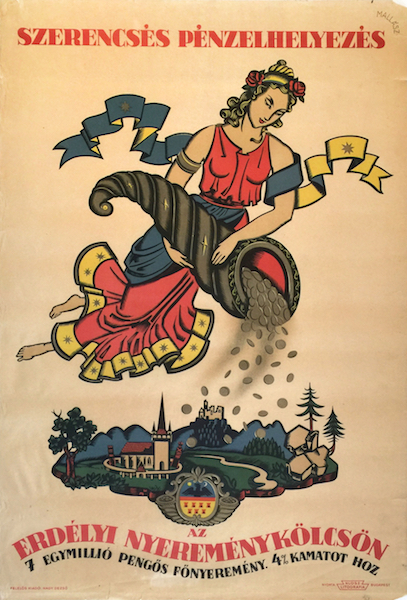 Fine, small tears along the borders, and some paper loss in one corner.

Transylvania Lottery Loan - A lucky way to place your money On this beautiful late Art Deco poster by Mallasz, there is a representation of the Goddess Fortuna spreading money. Beneath her, we see a charming landscape resembling Transylvania. This piece is a unique poster by Gitta Mallász, which was created in the short period when territories of Transylvania were given back to Hungary (1940-1944).

The Transylvanian lottery loan was widely advertised by Gitta Mallász’s poster. It even had a smaller version which was published in newspapers. After introducing the loan to the market, it proved to be a tremendous success for months: endless lines queued up in front of the banks. The success most probably was not caused by the poster of the loan, but by the exaggerated mood thanks to the accomplishments of the revisions.

Gitta Mallász was a world-famous artist mostly due to her book ‘Talking with Angels’. The book consists of a conversation of four people and an angel. Hanna Dallos, a graphic artist, colleague of Gitta Mallasz talks in the name of the angel. The book is based on a true story, which took place in 1943-44, which was lived through by a group of young Jewish people, first in a house on the country side, then in a fake defence plant created to rescue Jews. In this group Gitta Mallász was the only not Jewish, hence the only survivor later.

The lottery loan’s poster was made in 1941 and it strongly and intentionally resembles the archaic style, it looks like a woodcut. Besides, the iconography recalls allegories from the 19th century: an angel appears in the air and she holds a horn of plenty, from which symbols of wealth are falling down. On the bottom of the poster, mountains, pine trees and rocks are visible, but the strongest reference to Transylvania is the picture of a temple with a wooden steeple. The steeple temple of Körösfő (similar to the one on the poster) became a popular motif in Hungarian art in the beginning of the 20th century, thus becoming a symbol of Transylvania (see for example the Transylvania poster of György Konecsni). Gitta Mallász lived up to the taste of the public of the 1940s with her archaic like style, and gave the solemnity deserved by the ‘genuine’ topic.