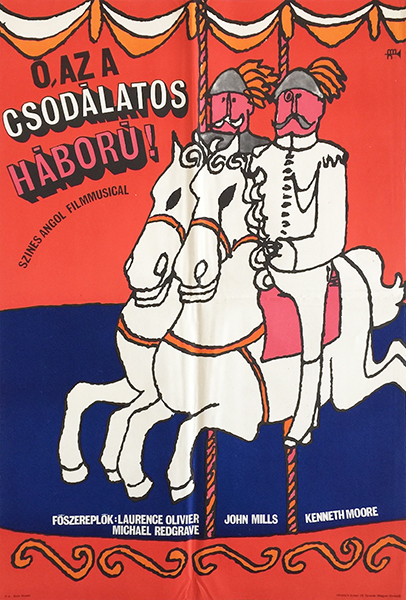 Oh! What a Lovely War

Oh! What a Lovely War is a 1969 British musical film directed by Richard Attenborough (in his directorial debut), with an ensemble cast including Maggie Smith, Dirk Bogarde, John Gielgud, John Mills, Kenneth More, Laurence Olivier, Jack Hawkins, Corin Redgrave, Michael Redgrave, Vanessa Redgrave, Ralph Richardson, Ian Holm, Paul Shelley, Malcolm McFee, Jean-Pierre Cassel, Nanette Newman, Edward Fox, Susannah York, John Clements, Phyllis Calvert and Maurice Roëves. The film is based on the stage musical Oh, What a Lovely War!, originated by Charles Chilton as a radio play, The Long Long Trail in December 1961, and transferred to stage by Gerry Raffles in partnership with Joan Littlewood and her Theatre Workshop in 1963. Th e title is derived from the music hall song Oh! It's a Lovely War, which is one of the major numbers in the film.

Oh! What A Lovely War summarises and comments on the events of the First World War using popular songs of the time, many of which were parodies of older popular songs, and using allegorical settings such as Brighton's West Pier to criticise the manner in which the eventual victory was won. (source: wikipedia.org)