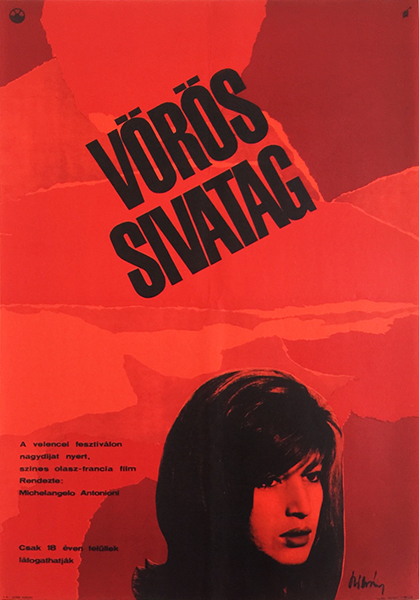 Red Desert is a 1964 Italian film directed by Michelangelo Antonioni, starring Monica Vitti with Richard Harris. Written by Antonioni and Tonino Guerra, the film is about a woman trying to survive in the modern world of cultural neurosis and existential doubt. "Red Desert," Antonioni's first color film, is renowned for stunningly colored industrial landscapes which express the unease, alienation, and vivid perceptions of the main character. The working title was Celeste e verde (Sky blue and green). Il deserto rosso was awarded the Golden Lion at the 25th Venice Film Festival in 1964. This was the last in a series of four films he made with Vitti between 1959 and 1964, preceded by L'Avventura (1960), La Notte (1961), and L'Eclisse (1962). (source: wikipedia.org). The design is based on the contrast of the red and black colours. The background is made with paper cut-out technique and there is the photo of the main character in front of it.