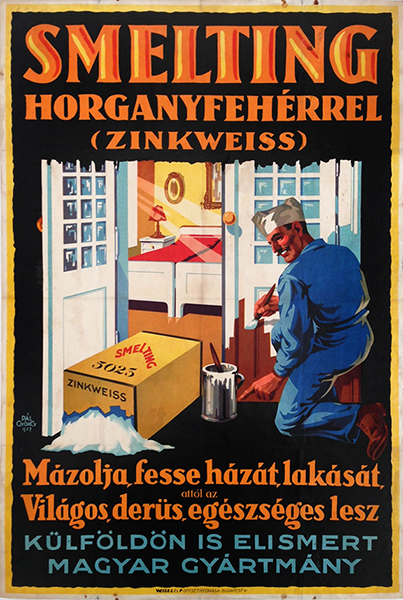 The image depicts a house-painter using Smelting Zinc white paint. He is painting one door of a bedroom, while the other white door is open and the white furniture can be seen inside. There is a huge bag of white paint at the door with the brand name visible on the box and a little metal jar next to it, already used. The painter looks back from his work, he is smiling and pointing at the jar of white paint. Thus the image implies that this type of paint is a pleasare for painters to work with, moreover it can be used for furnishing and other equipments as well.

The image is placed in front of a black background. The name of the brand and type of the paint appears at the top, and the further text beneath it: 'Daub, paint your house or flat, it makes it light, cheery and healthy. A Hungarian product approved abroad, too.' The message of the commercial is quite didactic, but it also has a slightly humorous character for today's audience.

This poster was one of the first posters of György Pál, who designed numerous commercial posters from that time on, for example for Tungsram, manufacturer of light bulbs and electronics, for Gschwindt can and Flora soap. After 1945 he became a frequently commissioned poster artist, and he designed several propaganda posters during the 1950s which revealed the same portrayal as can be seen on this early work of his.