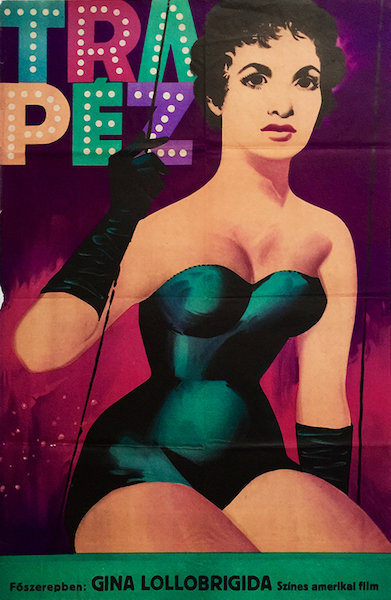 Trapeze is a 1956 circus film directed by Carol Reed and starring Burt Lancaster, Tony Curtis and Gina Lollobrigida, making her debut in American films. The film is based on Max Catto's novel The Killing Frost, with the adapted screenplay written by Liam O'Brien.

Crippled trapeze aerialist and former star Mike Ribble (Burt Lancaster) sees great promise in young, brash Tino Orsini (Tony Curtis). Ribble—only the sixth man to have completed the dangerous triple somersault—thinks his protégé is capable of matching the same feat, but only if he gives him rigorous training. However, Orsini is distracted by the new third member of their circus act, the manipulative Lola (Gina Lollobrigida). Tensions rise as a love triangle forms.

Lancaster, a former circus acrobat, performed many of his own stunts, though the most dangerous (including the climactic triple somersault) were done by technical consultant Eddie Ward from the Ringling Brothers Circus.[4] Trapeze was filmed entirely in Paris, including at the Cirque d'Hiver, and at the nearby Billancourt studios. (source:wikipedia.org)