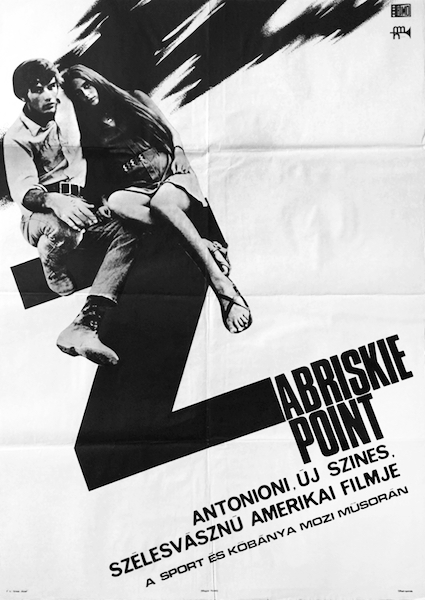 Zabriskie Point is an original vintage Hungarian movie poster from 1970.

Zabriskie Point is a 1970 American drama film directed by Michelangelo Antonioni, widely noted at the time for its setting in the counterculture of the United States. Some of the film's scenes were shot on location at Zabriskie Point in Death Valley. The film was the second of three English-language films that Antonioni had been contracted to direct for producer Carlo Ponti and to be distributed by Metro-Goldwyn-Mayer. The other two were Blowup (1966) and The Passenger (1975). The film was an overwhelming commercial failure, and was panned by most critics upon release. Its critical standing has increased, however, since its release. It has to some extent achieved cult status and is noted for its cinematography, use of music, and direction. (source: wikipedia.org)