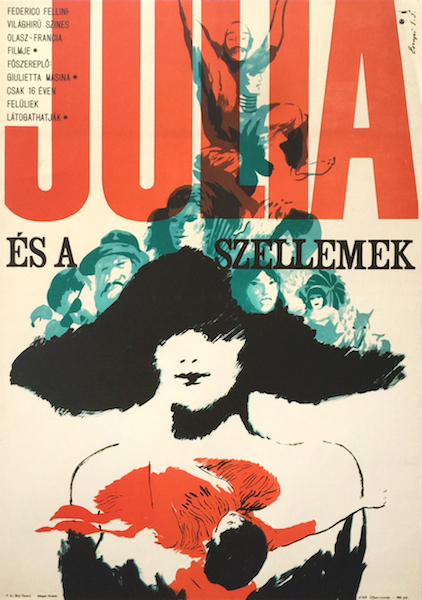 Juliet of the Spirits

Juliet of the Spirits is a 1967 Hungarian vintage movie poster for a Federico Fellini film designed by Sandor Ernyei.

Juliet of the Spirits (Italian: Giulietta degli spiriti) is a 1965 Italian-French fantasy comedy-drama film directed by Federico Fellini and starring Giulietta Masina, Sandra Milo, Mario Pisu, Valentina Cortese, and Valeska Gert. The film is about the visions, memories, and mysticism of a middle-aged woman that help her find the strength to leave her philandering husband. The film uses "caricatural types and dream situations to represent a psychic landscape." It was Fellini's first feature-length color film, but followed his use of color in The Temptation of Doctor Antonio episode in the portmanteau film Boccaccio '70 (1962). Juliet of the Spirits won a Golden Globe Award for Best Foreign Language Film in 1966. (source: wikipedia.org)