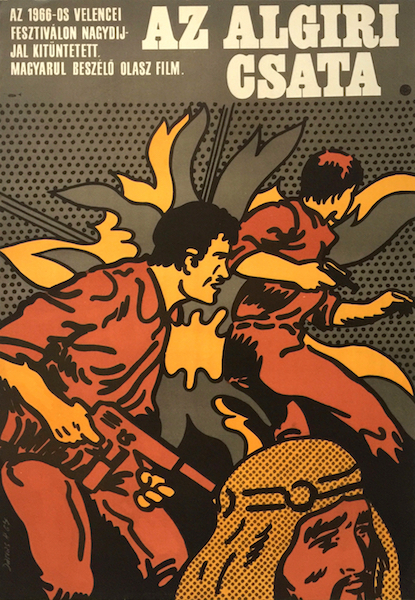 Battle of Algiers, The

The Battle of Algiers is a 1967 Hungarian vintage Pop Art movie poster designed by Arpad Darvas.

The Battle of Algiers (Italian: La battaglia di Algeri; Arabic: معركة الجزائر‎; French: La Bataille d'Alger) is a 1966 Italian-Algerian historical war film co-written and directed by Gillo Pontecorvo and starring Jean Martin and Saadi Yacef. It is based on events during the Algerian War (1954–62) against the French government in North Africa; the most prominent being the titular Battle of Algiers, the capital of Algeria.

It was shot on location and the film's score was composed by Ennio Morricone. The film, which was shot in a Roberto Rossellini-inspired newsreel style—in black and white with documentary-type editing—is often associated with Italian neorealism cinema.

The film has been critically celebrated and often taken, by insurgent groups and states alike, as an important commentary on urban guerrilla warfare. It occupies the 48th place on the Critics' Top 250 Films of the 2012 Sight & Sound poll as well as 120th place on Empire magazine's list of the 500 greatest movies of all time.

Algeria gained independence from the French, a matter which Pontecorvo portrays in the film's epilogue. The film concentrates on the years between 1954 and 1957 when the guerrilla fighters regrouped and expanded into the Casbah, the citadel of Algiers, which was met by French paratroopers attempting to regain territory. The highly dramatic film is about the organization of a guerrilla movement and the illegal methods used by the colonial power to contain it. A subject of socio-political controversy, the film was not screened for five years in France, where it was later released in 1971. (source: wikipedia.org)