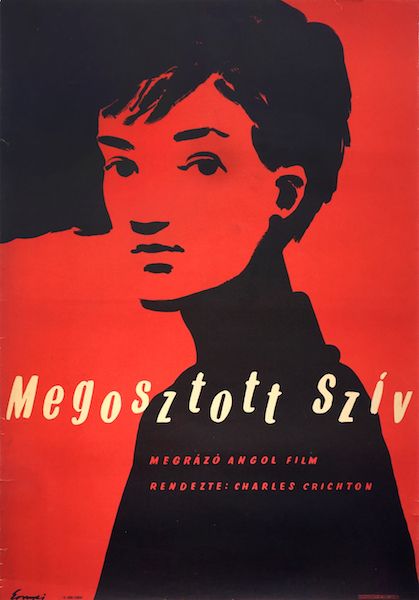 The Divided Heart is a 1957 vintage Hungarian poster designed by Sandor Ernyei.

The Divided Heart is a black-and-white British film directed by Charles Crichton and released in 1954. The film is a drama, based on a true story of a child, whose father was a member of Slovenian Partisans executed by Nazis and whose mother was deported to Auschwitz, while little Ivan was, like other 300 babies and young children from Slovenia, whose parents were declared Banditen by Nazis, sent to Germany in a Nazi program known as Lebensborn.

The script was written by Jack Whittingham and Richard Hughes. It was produced by Michael Truman and edited by Peter Bezencenet, with cinematography by Otto Heller and music by Georges Auric. The Divided Heart was widely admired, and won three British Academy Film Awards. (source: wikipedia.org)