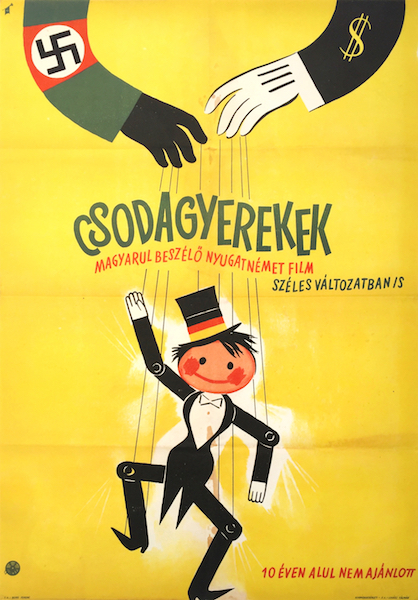 Aren't We Wonderful! is a 1959 vintage Hungarian movie poster.

Wir Wunderkinder is a 1958 West German comedy film directed by Kurt Hoffmann and starring Hansjörg Felmy and Robert Graf. The black-and-white film is also known in English as Aren't We Wonderful?.

The film recounts the lives of two schoolmates, Hans Boeckel and Bruno Tiches from the fictional town of Neustadt an der Nitze, against the backdrop of German history in the first half of the 20th century. It is told by a narrator (Wolfgang Neuss) who is supported by Wolfgang Müller with music. Through their presentation and discussion of events in the film these two provide a running commentary on political and social issues between the acts of the movie and link them together with explanations and songs.

On the anniversary of the Völkerschlacht in 1913, the two boys, Hans and Bruno, rush a balloon that is supposed to travel to Leipzig and carry a laurel wreath to Emperor William II. Hans is caught and punished, but Bruno stows away, causing the balloon to crash far from its intended goal. However, he tells a tall tale of his trip to Leipzig and his meeting with the Kaiser, for which he is congratulated and awarded a gift. This marks a trend for the future: While hard-working Hans has to work struggle for everything in life, carefree Bruno is lucky and seems to succeed without even trying.

The action fast-forwards to the post-World War I period when Bruno works at the 'Bankhaus Stein & Co.', having befriended his schoolmate, the son and heir of the bank, Siegfried Stein. He also deals on the black market. Some years later, during the inflation of 1923, Hans has to sell newspapers to pay his way through university at Munich. Bruno calls on him and asks for some food and money, having quit his job as a "slave of the Jewish capital" to join up with the Bewegung of Adolf Hitler. Hans falls in love with fellow student Vera von Lieven. However, she becomes ill and has to go to Switzerland for her health. Hans finishes his PhD and becomes a journalist with a Munich newspaper. Bruno joins the NSDAP and makes a career as a Nazi.

During a Fastnacht party in 1932, Hans meets Kirsten, a student from Denmark. After the Nazis seize power, Siegfried Stein visits Hans and asks him for help. Stein wants to know whether he should flee across the border immediately or wait for a passport. Hans promises to talk to Bruno, who is now in a position of authority in the party and lives in a large house confiscated from a Jewish doctor. However, he finds that Bruno is quite unwilling to help a Jew.

Vera contacts Hans and asks him to meet her in Verona. He travels there but before they can talk, she learns that her father, an academic, had to flee Nazi Germany, leaving behind all his possessions. She decides to join her father in France and she and Hans part for good. When Hans returns to Munich, Kirsten has gone back to Denmark. The Nazis have taken over the newspaper and he loses his job when he fails to greet the visiting Bruno in the proper fashion. Asked for help, Bruno is willing to oblige, but only on condition that Hans joins the party. Hans refuses.

In 1939, Kirsten returns to Munich where Hans works as an assistant at a bookstore. They go to Denmark together and get married, but when war starts, Hans has to return to Germany and she accompanies him. The final scene from the Nazi years shows Bruno in 1944 giving a "holdout" speech.

With the war over, Hans returns to Neustadt, having been a POW. He, Kirsten and their two children live in quite poor conditions while Bruno, who has changed his surname to "Anders", makes a comfortable living from his black market activities. The lot of the Boeckel family only improves when Siegfried Stein, now a member of the occupation forces, gets Hans a job at a newspaper in Munich.

Finally, in the period known as the Wirtschaftswunder, Bruno has risen to the rank of Generaldirektor (head of company) while Hans works as a journalist. When he writes a critical article, referencing Bruno's Nazi past, Bruno visits Boeckel's boss and threatens to organise an advertising boycott of the paper unless Hans retracts the story. Hans refuses and Bruno storms out. Finally abandoned by his luck, he falls into an empty elevator shaft. (source: wikipedia.org)