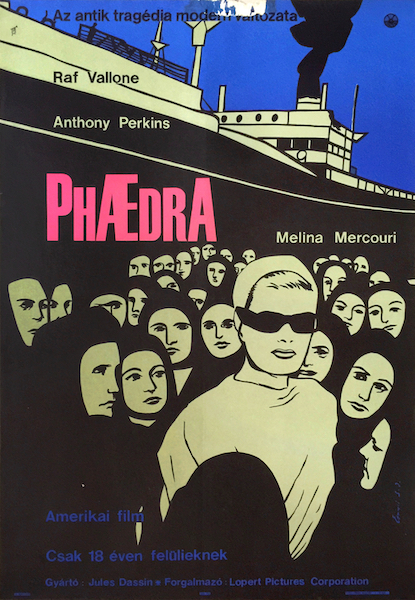 Phaedra (Greek: Φαίδρα) is a 1962 American drama film directed by Jules Dassin as a vehicle for his partner (and future wife) Melina Mercouri, after her worldwide hit Never on Sunday.

The film was the fourth collaboration between Dassin and Mercouri, who took the title role. Greek writer Margarita Lymberaki adapted Euripides' Hippolytus into a melodrama concerning the rich society of ship owners and their families, but still containing some of the tragic elements of the ancient drama. The film is set in Paris, London, and the Greek island of Hydra.

The powerful Greek ship-owner and constructor Thanos proposes to marry Phaedra during the baptism of a ship with her name. Phaedra, who is the daughter of Thanos' greatest competitor, is a bored woman. Thanos gives an expensive ring to Phaedra and soon she learns that his estranged son from his first marriage, Alexis, has left the London School of Economics (L.S.E.) in London to dedicate himself to painting. Thanos asks Phaedra to travel to London to bring Alexis to meet him in Greece. When Phaedra meets Alexis, she falls in love with her step-son and seduces him. Their doomed love affair leads the family to a tragedy.