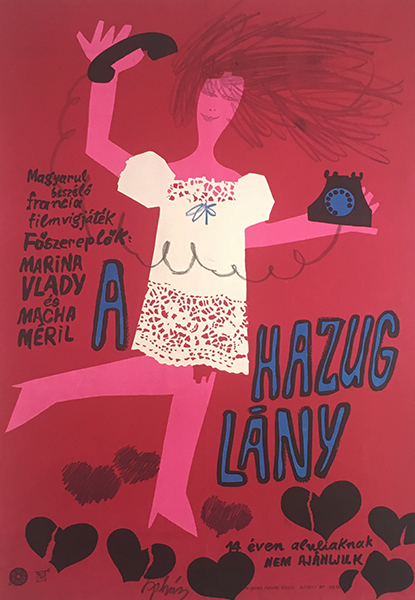 Colorful design by Nándor Szilvásy for a French comedy.

In this early Deville movie, one finds already the lightness, the apparent frivolity which will still exists 40 years later in movies like Un monde si paisible. Adorable menteuse is the story of an archetypal airhead (hmm- yes, blonde), of her lies and not much else. Not much else apart from: being confronted with reality, the nature of joie de vivre, love and all that. It has the lightness of a soufflé. This sort of inconsequential story is of course the most difficult to tell, but Deville's sure hand avoids all the traps of sentimentality, and gives us a wonderful lesson in cinema. Seen four decades later, this movie acquires also the function of a time capsule: this was Paris in the early sixties, there was an air of joyful excitement which today's politically correct movies lack. Definitely a fingerlicking movie! (source: imdb.com)