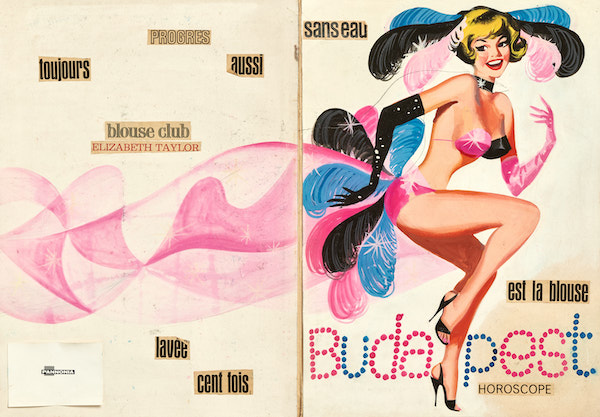 Sándor Lengyel was one of the most prominent representatives of Hungarian advertising graphics of the fifties and sixties. The most beautiful pieces of the decorative drawing style, typical of the era, were produced by him. His style is instantly recognizable, and his charming, attractive female figures show up in countless works. Outstanding even among these is this spectacular cover design, in which a showgirl dressed in a sequined pink and black bikini adorned with blue and black feathers smiles flirtatiously. Its momentum is indicated by a swirling, shimmering pink abstract form surrounded by inscriptions scattered, combining the bravura of the tempera painting with collage elements. At the foot of the female figure is a pink and blue Budapest inscription made of dots. The design for the tourism publication was based on the style of one of the dominant American press products of the era - Esquire.