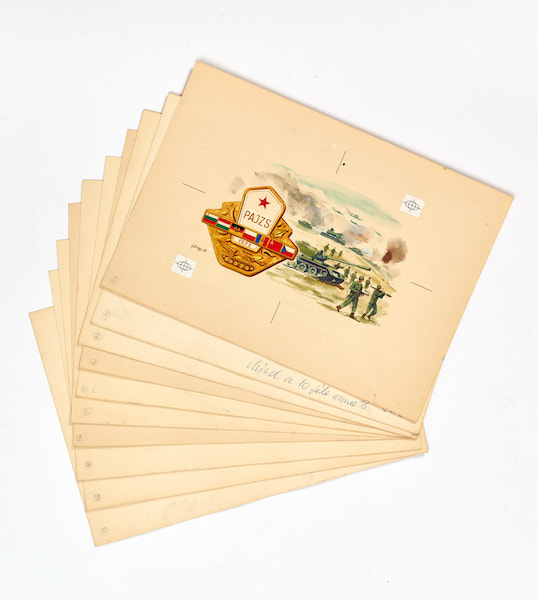 Military exercises of the Warsaw Pact

Military exercises of the Warsaw Pact is a 1970 series of 10 original hand painted communist propaganda artworks by Bela Gonczi.

Nine of the ten pieces each commemorate war games of the Warsaw Pact, while the first one is a cover piece, which adds up to a complete series. The works are numbered from 1 to 10.

The Warsaw Treaty Organization (WTO), officially the Treaty of Friendship, Cooperation and Mutual Assistance, commonly known as the Warsaw Pact (WP), was a collective defense treaty signed in Warsaw, Poland between the Soviet Union and seven other Eastern Bloc socialist republics of Central and Eastern Europe in May 1955, during the Cold War.

The Warsaw Pact was the military complement to the Council for Mutual Economic Assistance (CoMEcon), the regional economic organization for the socialist states of Central and Eastern Europe. The Warsaw Pact was created in reaction to the integration of West Germany into NATO in 1955 per the London and Paris Conferences of 1954. The Warsaw Pact was established as a balance of power or counterweight to NATO. There was no direct military confrontation between them; instead, the conflict was fought on an ideological basis and in proxy wars. Both NATO and the Warsaw Pact led to the expansion of military forces and their integration into the respective blocs.

Its largest military engagement was the Warsaw Pact invasion of Czechoslovakia in August 1968 (with the participation of all Pact nations except Albania and Romania), which, in part, resulted in Albania withdrawing from the pact less than a month later. The Pact began to unravel in its entirety with the spread of the Revolutions of 1989 through the Eastern Bloc, beginning with the Solidarity movement in Poland, its electoral success in June 1989 and the Pan-European Picnic in August 1989. East Germany withdrew from the Pact following German reunification in 1990. On 25 February 1991, at a meeting in Hungary, the Pact was declared at an end by the defense and foreign ministers of the six remaining member states.

The USSR itself was dissolved in December 1991, although most of the former Soviet republics formed the Collective Security Treaty Organization shortly thereafter. In the following 20 years, the Warsaw Pact countries outside the USSR each joined NATO (East Germany through its reunification with West Germany; and the Czech Republic and Slovakia as separate countries), as did the Baltic states which had been part of the Soviet Union.

A military exercise or war game is the employment of military resources in training for military operations, either exploring the effects of warfare or testing strategies without actual combat. This also serves the purpose of ensuring the combat readiness of garrisoned or deployable forces prior to deployment from a home base. War games involving two or more countries allows for better coordination between militaries, observation of enemy's tactics, and is a visible show of strength for the participating countries.