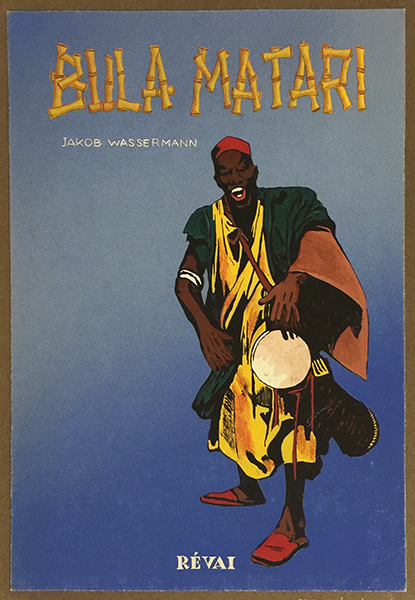 „Bula Matari was first published in Germany in 1932. The English edition – re-titled H.M. Stanley, Explorer – appeared the same year, translated by Eden and Cedar Paul. Wassermann prefaces the book with a brief introductory chapter explaining his choice of subject:

»A good while ago, some of my friends asked me what I was working at. When I told them that I wanted to write a life of Henry Morton Stanley and had, with this end in view, been studying the subject for several years, they were very much surprised. What, they enquired, could interest me in a man whose doings had been of little moment in his lifetime and would leave no conspicuous traces in history – a man whose name had already lapsed into oblivion? I dissented from these opinions. Stanley’s name, I rejoined, was haunted by that melody of fame which arouses responses in the unconscious; it was characterised by the rhythms which derive from a mention by millions upon millions of tongues; and what they styled “oblivion” was no more than a passing forgetfulness.«

Stanley, at the time Wassermann was writing, was a marginalised figure. His reputation had been sullied by accusations of cruelty, his adventures in Africa linked – unfairly - to the colonial exploits of Leopold II. Public recognition of his achievements had consistently been undermined by »calumny«. Numerous »falsehoods« were attached to his image. Challenging these falsehoods thus becomes a key aim of Wassermann’s project: »to describe a great man as he actually was and actually lived.«”
(source: jakobwassermann.blogspot.hu)

This artwork is a book cover design maquette for the Hungarian edition of the book Bula Matari. It was created by Jenő Deme. There is hardly any information known about Deme, but we can find some works by him from the 1930s following the main styles of the period. This piece is a concentrated composition with an African male figure in the centre. He is wearing traditional, colourful local clothing and he is depicted to be playing the drums and singing while facing the viewer. Above him the title appears in letters represented by dry bamboo branches in front of the light blue background. The design is a modernist painted piece with the influence of the Art Deco style.