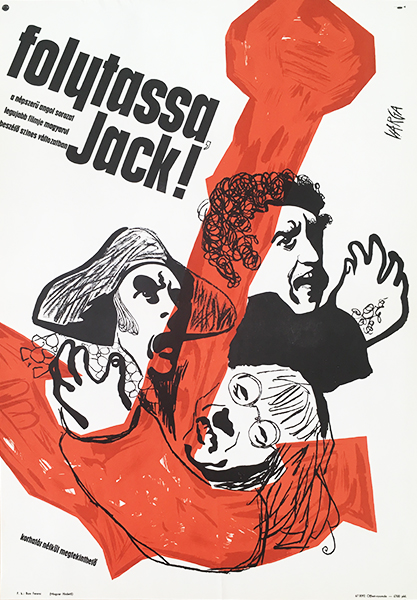 Carry On Jack is a 1967 vintage Hungarian movie poster designed by Gyozo Varga for an English film.

Carry On Jack is the eighth in the series of Carry On films to be made and was released in 1963. Most of the usual Carry On team are missing from this film: only Kenneth Williams, Charles Hawtrey and Jim Dale appear throughout. Bernard Cribbins makes the first of his three appearances in a Carry On. Juliet Mills, Donald Houston and Cecil Parker make their only Carry on appearances in this film.

Carry On Jack was the second of the series to be filmed in colour and the first Carry On film with a historical setting and period costumes. As with its immediate predecessor, the script for Carry on Jack started off as a non-Carry On film (originally entitled Up the Armada) and after a number of title changes was incorporated into the series. (source: wikipedia.org)