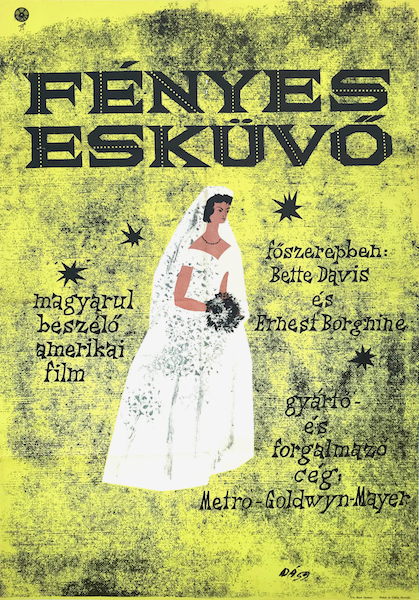 The Catered Affair is a 1959 vintage Hungarian movie poster designed by Arpad Darvas.

The Catered Affair (1956), also known as Wedding Party, is a family drama film made by Metro-Goldwyn-Mayer. It was directed by Richard Brooks and produced by Sam Zimbalist from a screenplay by Gore Vidal, based on a television play by Paddy Chayefsky. The film score was by André Previn and the cinematography by John Alton.

The film stars Bette Davis, Ernest Borgnine, Debbie Reynolds, Barry Fitzgerald and Rod Taylor. It was Taylor's first film for MGM after having been signed by the studio to a long-term contract. (source: wikipedia.org)