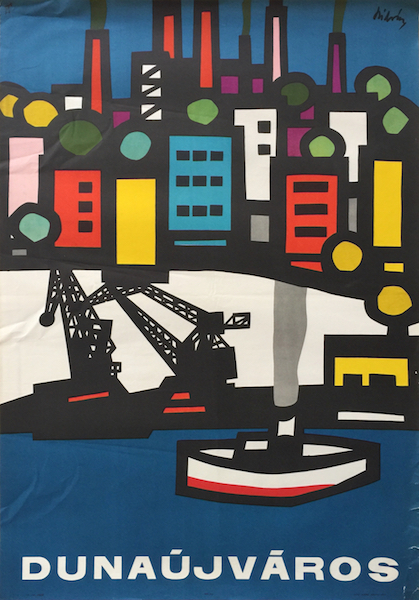 Dunaújváros (formerly known as Dunapentele and Sztálinváros) is an industrial city in Fejér County, Central Hungary. The city is best known for its steelworks, which is the largest in the country. Szilvásy's poster shows a very decorative and happy image about the otherwise not so attractive industrial city.

Dunaújváros is one of the newest cities of the country. It was built in the 1950s during the industrialization of the country under Socialist rule, as a new city next to an already existing village, Dunapentele. After World War II the new, Communist government started a major industrialisation programme, in support of its rearmament efforts. In 1949 Dunaújváros was chosen as site of the largest iron and steel works. Originally they were to be built close to Mohács, but the Hungarian-Yugoslavian relations worsened, and this new site was chosen, farther away from the Yugoslavian border.

The city was designed to have 25.000 residents. The construction of the city began on May 2, 1950 near Dunapentele. Within one year more than 1,000 housing units were built and the factory complex was under construction. The city officially took the name of Joseph Stalin on April 4, 1952; its name was Sztálinváros 'Stalin City' as a parallel to Stalingrad in the USSR. The metal works were opened by 1954. The city had a population of 27,772 at this time; 85% of them lived in nice, comfortable apartments, while about 4,200 people still lived in uncomfortable barracks which originally provided "homes" for the construction workers. Thanks to its formal political and economic importance, the communist urban design, the socialist realist architecture and its unique atmosphere the town is the considerable memento of communism. Many of the half-century old buildings have received the protection of historic monuments, and the town is in the focus of growing touristic interest.
(source: wikipedia.org)

Dunaújváros was the manifestation of the Communist ideology and the symbol of the successes the socialist system contributed to itself, therefore posters for popularizing the city appeared on the streets with propaganda purposes.