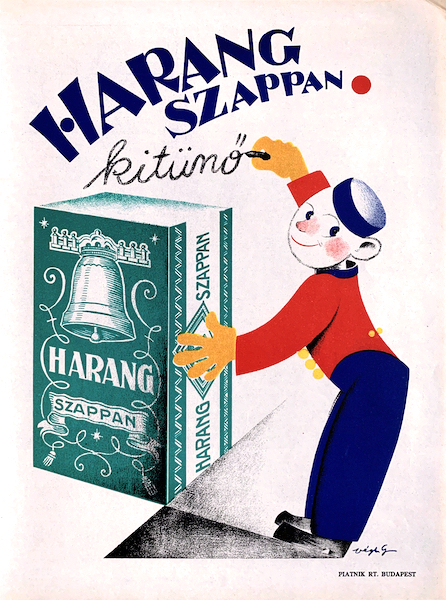 Although Bortnyik won the competition, the best 14 works were published in one of the most important graphic art magazines of the era, 'Magyar Grafika' (Hungarian Graphics) in 1929. These works are good examples of the so-called “objective poster” which got its name after the focus on the advertised object, differing from the previous commercial posters which motivated to consume goods in general. The kind of objective posters came into being in the 1920s, connected to the modern culture and lifestyle of the era.

This piece is one of the best 14 works, created by Sándor Kolozsváry. It is a colourful piece which focuses on the advertised product. The soap itself appears almost as large as life at the top in its original packaging in front of a yellow background. The brand 'Harang' means bell, that was why the product had a graphical design of a bell as a trademark on the packaging. The soap is depicted to be pulled out of the packaging by a pair of female hands which appear to be surrounding the pack. There is a blue washbasin against, full of foam. One sheet is hanging out of the washbasin, and bubbles are floating upwards. The slogan appears in white in a black panel at the bottom. The whole design is a concentrated composition, in a lovely, decorative portrayal.