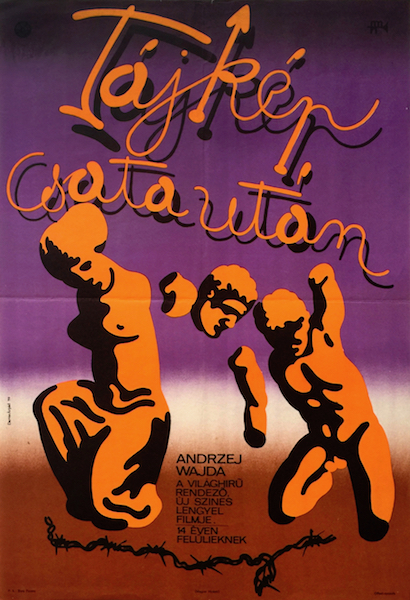 Landscape After the Battle

Landscape After the Battle is a 1970 vintage Hungarian movie poster designed by Arpad Darvas.

Landscape After the Battle (Polish: Krajobraz po bitwie) is a 1970 Polish drama film directed by Andrzej Wajda and starring Daniel Olbrychski; telling a story of a Nazi German concentration camp survivor soon after liberation, residing in a DP camp somewhere in Germany. It is based on the writings of Holocaust survivor and Polish author Tadeusz Borowski. In most part, the plot revolves around the events depicted in Borowski's short story called "Bitwa pod Grunwaldem" ("The Battle of Grunwald") from his collection This Way for the Gas, Ladies and Gentlemen. The film was entered into the 1970 Cannes Film Festival. (source: wikipedia.org)