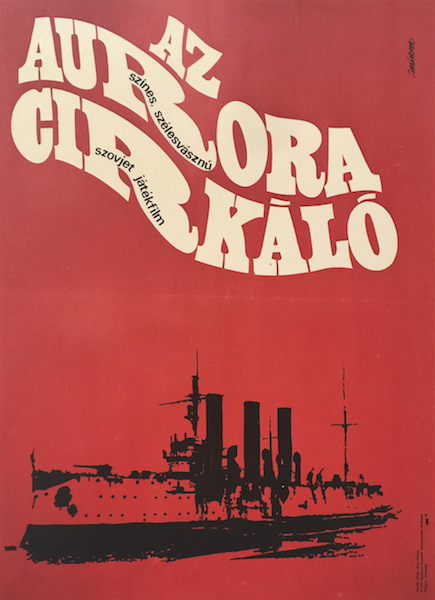 Salvos of the Aurora Cruiser, The

The Salvos of the Aurora Cruiser (original title: Zalp Avrory) is a 1965 vintage Hungarian movie poster designed by Arpad Szabo advertising a Russian film, which was directed by Yuri Vyshinsky, written by Boris Lavrenyev and Yuri Vyshinsky and starring Sergey Boyarskiy, Zinaida Kirienko and Mikhail Kuznetsov.

Aurora (Russian: Авро́ра, tr. Avrora, IPA: [ɐˈvrorə]) is a 1900 Russian protected cruiser, currently preserved as a museum ship in Saint Petersburg. Aurora was one of three Pallada-class cruisers, built in Saint Petersburg for service in the Pacific. All three ships of this class served during the Russo-Japanese War. Aurora survived the Battle of Tsushima and was interned under US protection in the Philippines, and eventually returned to the Baltic Fleet. The second ship, Pallada, was sunk by the Japanese at Port Arthur in 1904. The third ship, Diana, was interned in Saigon after the Battle of the Yellow Sea. One of the first incidents of the October Revolution in Russia took place on the cruiser Aurora.

During World War I Aurora operated in the Baltic Sea performing patrols and shore bombardment tasks. In 1915, her armament was changed to fourteen 152 mm (6 in) guns. At the end of 1916, she was moved to Petrograd (the renamed Saint Petersburg) for a major repair. The city was brimming with revolutionary ferment and part of her crew joined the 1917 February Revolution. The ship's commanding officer, Captain Mikhail Nikolsky, was killed when he tried to suppress the revolt.

A revolutionary committee was created on the ship, with Aleksandr Belyshev elected as captain. Most of the crew joined the Bolsheviks, who were preparing for a Communist revolution. At 9.40pm on 25 October 1917 (Old Style.) (7 November New Style) a blank shot from her forecastle gun signaled the start of the assault on the Winter Palace, which was to be the beginning of the October Revolution. In summer 1918, she was relocated to Kronstadt and placed into reserve. (source: wikipedia.org)