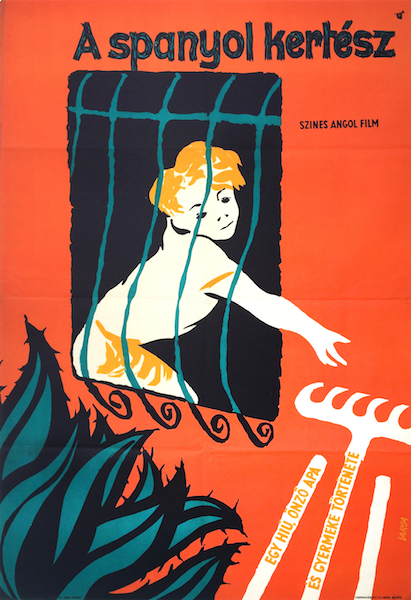 The Spanish Gardener is a 1958 vintage Hungarian movie poster designed by Gyozo Varga.

The Spanish Gardener is a 1956 VistaVision and Technicolor film based on the novel of the same name by A. J. Cronin, first published in 1950. The film stars Dirk Bogarde and Jon Whiteley, and was directed by Philip Leacock. The adaptation was filmed both at Pinewood Studios, near London, and in Palamós, nearby Mas Juny estate, and in S'Agaro, on the Costa Brava, Catalonia. Nicholas (1958) and O Jardineiro Espanhol (1967), are adaptations of the story for Brazilian television. The film was entered into the 7th Berlin International Film Festival. (source: wikipedia.org)