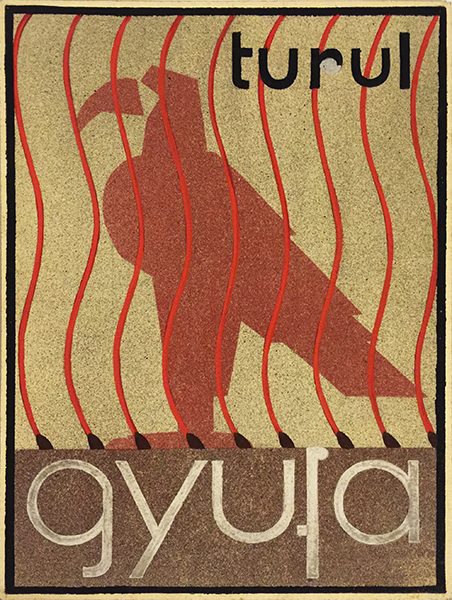 The Turul matches were named after the iconic kind of bird. “The Turul is the most important bird in the origin myth of the Magyars (Hungarian people). It is a divine messenger, and perches on top of the tree of life along with the other spirits of unborn children in the form of birds. The Turul became a symbol of power, strength, and nobility, and it is still used today on the coat of arms of the Hungarian Army, the Counter Terrorism Centre and the Office of National Security. The most common motifs of the ninth and the early tenth centuries—the griffin, wolf and hind—seldom figure in later Hungarian iconography and heraldic symbolism, however the Hawk or Turul, which in shamanistic lore rested upon the tree of life connecting the earth with the netherworld and the skies, preserved for longer as a device belonging to the ruling house. [...]

In the legends the Turul is mentioned at least twice to have shaped the fate of the Hungarians: on the first occasion Emese, mother of Álmos, [...] had a dream in which a Turul appeared, impregnated her symbolically and a stream of crystal-clear water started to flow from her womb. As it moved west, it grew into a great river, which signified that her child was going to be the father of a line of great rulers. The second time, the leader of the Hungarian tribes had a dream in which eagles attacked their horses and a Turul came and saved them. This symbolised that they had to migrate, and when they did so, the Turul helped them to show the way and eventually led them to the land that became Hungary.”

It is no coincidence that the oldest original Turul matchboxes preserved (which you can find in antiquities today) are found to be from the irredentist times of Hungary.  Already before the Trianon Treaty was signed in 1920, a huge outcry, protest and lobby started against it, only to be continued afterwards. During the campaign numerous national symbols were used to touch people emotionally and to obtain their support. The founder of the Turul matchbox-brand caught on this attraction and used the iconic bird as the label of the product. The early original packaging design of the matchbox showed the bird flying and carrying the coat of arms of Hungary.

This artwork here could aim to be either a following design for the matchbox-covers, or the advertisement about it, or even both. (Its design highly reminds of a matchbox-cover, although the artwork was created in a tram poster size which can refer to the fact that it was a poster or an advertisement maquette.) It captures another kind of representation of the Turul bird: the animal is depicted standing sideway at rest, still its presence is strong and powerful. The bird is much more iconic than realistic here as the body is presented without additional details, only as a big, brownish red colour patch with sharp outlines. It appears in front of a grainy-like, beige background and behind a pattern created by red, wavy matches. They end along the same line and they cause a nice rhythm in the design, at the same time as if they shaped a cage for the bird. The inscription (Turul matches) appears in black and white. The elements are put in a black frame altogether. The composition is concentrated and mature, and it evokes the simple, elegant and modern design era of the 1930s.