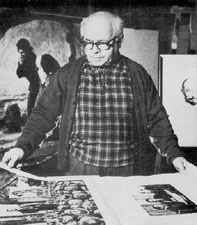 Sandor Ek or Alex Keil was a Hungarian graphic artist and poster designer, who worked in Hungary, Germany and Russia as well. His name was originally Leicht and he chose Ék and its German version, Keil (~wedge) as a movement name.

Growing up in a suburb of Pest (Angyalföld) as a poor working class child, he engaged in the socialist ideology from a very early age and by the time he was 16, he entered the Hungarian Communist Party (KMP). In 1919 the seventeen-year old boy happily greeted the Hungarian Soviet Republic, which existed 133 days. He drew political caricatures for papers and, after being a member of the Red Army for a short time, he studied arts in the school of Béla Uitz and József Nemes-Lampérth (important Hungarian painters of that age).

After the fall of the Hungarian Soviet Republic he immigrated to Vienna. In 1921 he participated in the “Young Worker’s International” in Moscow (where he met Lenin personally) and studied in VHUTEMASZ from El Liszickij for several months. During these times he was painting in modern and constructivist style, which he gave up soon for the obligatory socialist realism. He has also visited Berlin and Paris and later returned to Budapest, where he has been arrested. After 1925 he lived in Germany and worked for the “Rote Fahne”, “Arbeiter Illustrierte Zeitung” and for other leftist newspapers. Here he made a name for himself as a designer of leftist propaganda posters, similarly to John Heartfield’s antifascist designs.

Because of Hitler’s rise he left for the Soviet Union in 1933, where he won a poster competition organised for the anniversary of Lenin’s death.

In 1944 he joined the Soviet Red Army. Ék was an enthusiastic photographer as well and a lot of his pictures remained in the Hungarian National Museum and other collections. He has documented on several photos the horror of the war and the fascist era. He took pictures about the exhumations in Budapest: shortly before the Soviets captured the city,the German and Hungarian extreme rightist (Arrow Cross) troops had killed and buried in mass graves Jews and other citizens who were considered enemies. Ék’s pictures are shocking documents of these massacres.

After the fall of Budapest three antifascist posters of Ék covered the walls of the city. They all predicted the fall of Hitler’s Nazi power with their titles: “We finish the Beast in its own cave”, “The Nazi Germany will fall shortly – under the blows of the Allies, that is what the Krim Conference decided” and “The fascist beast shall not escape!”. All the three represent Hitler under the attack of the allied forces. All of them are very aggressive, bloody and brutal and they make clear that there will be no mercy for the Nazis.

Sándor Ék’s loyalty to the communist power lasted until his death. His works always followed the obligatory manner: the socialist realism. He chose the suggested themes for his paintings: workers, peasants, Lenin and Stalin, and the liberating Red Army was often represented in his oeuvre.