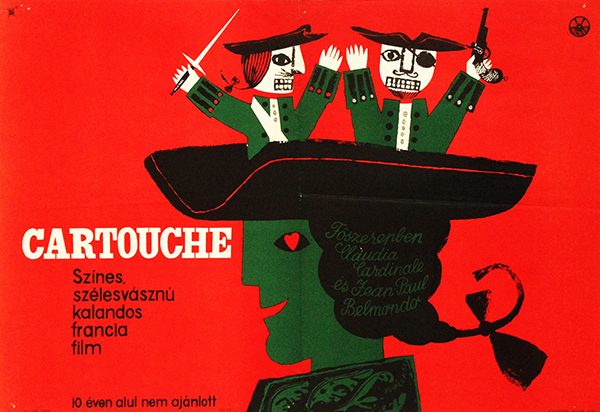 Fine, horizontal and vertical fold marks and pinholes in the corners.

The poster shows an impressive paper-cut and painted composition that is defined by strong contrasts of the colors. The decorative poster was created for the movie Cartouche which stars Jean-Paul Belmondoo and Claudia Cardinale. In the 18th century, Louis de Bourguignon is working with the Malichot's gang, but their ways are too 'unethical' for him. He creates his own band, acting under the name of Cartouche, making audacious robberies of the rich people, and even distributing the takings with the poor. Thus, cartouche attracts the people's sympathies, Venus's love, and hate from the Police and Malichot... Cartouche can escape all the traps they set at him - except the entrapments of love. Eventually, he will be saved by a woman, at her own cost. (source: imdb.com)