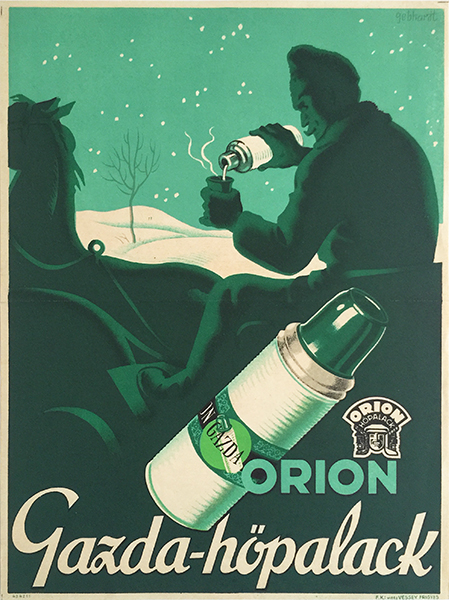 Decorative commercial poster from the 1940s. It was advertising the Orion thermos, targeted at farmers.

The 1940s was a decade when life was changing fast. The first part of it was defined by the World War II which weakened the country's economy and brought serious burdens for the population. However, several social reforms were introduced in the beginning of the 1940s which made workers and peasants more contented. The end of unemployment in the field of agriculture and industry, the increase of the wages of workers and the housing activity of the government, among other acts, were contributing to the better circumstances. During the first years of the decade, commerce was stable and it was still flourishing. This kind of atmosphere could make it happen that products were created especially for the need of these social groups when the war was already started.

The poster was designed by Tibor Gönczi Gebhardt, a productive poster artist of the period. He studied at the School of Applied Arts between 1918 and 1922 under Ferenc Helbing and Jenő Haraghy. Gönczi's early posters had an Art Nouveau character in the 1920s, after which his style was defined by Art Deco in the 1930s. He was influenced by the art of György Konecsni, so he started using folkloristic elements and a realist sensibility. He developed a visual world with graceful figures and plain symbols which was effective in reaching audience of workers and peasants, too. After 1945, he joined to design political posters, a genre which was emerging those years. His works for the communist party were realistic, epic, and easy to understand. These were the characteristics of his later socialist realist designs, too, as he was a central figure in the political propaganda after 1949. He was still working in the 1960s as well, when his new posters were colorful and cheerful commercial, tourism and event posters.

This poster is a beautiful Art Deco piece. It depicts a rural scene: a peasant figure is pouring out a hot beverage of the advertised thermos at a cold winter night. He is sitting on the top of a farm-wagon with a hourse, and the background shows a snowy landscape with the stars on the sky. The impressive shades of turquoise, the dark green and white colours in which the scene is depicted are in harmony with the design of the thermos itself, appearing in the foreground. Its original packaging shows the beauty of the industrial design of the Art Deco period. The official trademark and the logo of the producing company, Orion, can be seen next to the product figure, and the name of the product is put below, using a decorative typographic design. The whole composition is easy to understand, still it can remain an attractive design. With its monumental and spectacular appearance, the poster followed the traditions of the commercial design of the 1930s, and also beared the realistic portrayal which Gönczi preffered to use.