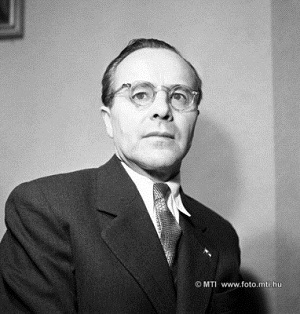 Tibor Gonczi Gebhardt was a very productive poster artist whose style was first defined by Art Deco, then after 1945 by socialist realism.  His designs are invariably realistic and easily approachable. One of his main subjects was agriculture. He usually signed his works as "Gönczi", sometimes as "Gebhardt".

Gönczi began to make graphic designs at a young age. In addition to posters, he designed menus, emblems, stamps, and labels.

Between 1918 and 1922, Gönczi studied at the Iparművészeti Iskola (School for Applied Arts), where his masters were Ferenc Helbing and Jenő Haranghy.

In the 1930s, his realist sensibility seemed to be especially effective in reaching the workers and peasants. He designs very typical figures of workers, and their forms display grace and immensity.  Influenced by the art deco style of György Konecsni, Gönczi prefered working with folkloristic forms.

From 1930 on, he worked as the graphic designer of the “Klösz György és Fiai Rt”; later he worked for the firm’s legal successor, Offset Nyomda (Offset Printery). Besides his applied graphic works, he also drew ex librises (bookplates) and illustrations.

During the Second World War, he prepared heroic images for the Red Cross.

After 1945, he joined the emerging movement of the political poster, as he designed some posters for the communist party. His works remain realistic, epic, and easy to understand, qualities that equally characterise his socialist realist designs. After 1949 he remained a central figure in the propaganda of the centralized power. He created a famous poster for the merging conference of leftist parties. (The conference's result was that only one party, Népfront remained.) Gönczi's design use the figures of Vera Muhina's famous statue: the worker and the peasant woman. They are leaning ahead together, in a very dynamic composition.

His posters for national holidays (like that of 20th August) and for tourism of Hungary represent a typical image about the new happy state. His agricultural posters are sometimes like illustrational boards, which told basic information to peasants about agricultural works. In this period, the secret of his success was that he could produce posters in his own drawing style, combined with the expectations of socialist realism.