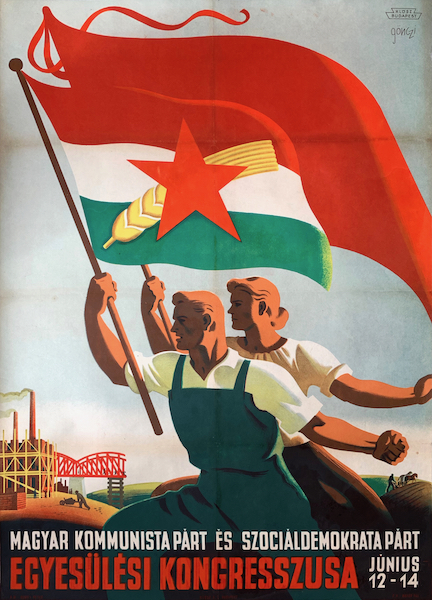 This poster by Gönczi Gebhardt is a recognized piece and the fame is well-earned: it is an important historical relic and a very strong artwork. It promotes a huge public event, which took place on the 12th of June, in 1948. This was the occasion where it was declared that the Social Democratic party will merge into the Communist party for good, thus Hungary took a step towards being a single-party state. The organization of the new system became complete with the inception of the People’s Front and with the changing of the voting system.

Reports of the Congress tell about the event in an excited tone: “The Congress of the merging of the Hungarian Communist Party and Social Democratic Party states that the elimination of the gap which was being apparent in the Hungarian working class for three decades, and the foundation of the organized political unity of the working class is the glorious victory of the people’s democracy and the huge defeat of the reactive forces. The merging of the two workers’ parties had been prepared by the years of long tenacious fight by the Communist Party for the revolutionary unity of the Hungarian workers’ class....’. However, the reality was that the Communist Party simply devoured the Social Democratic Party as the last step of their salami tactics, when they slowly 'sliced up' the opposing political parties to gain monopoly.

The poster follows the typical iconography of the socialist realistic style: male and female figures moving forward – the inspiration for this was the work of Vera Mukhina from the 1930s ‘Worker and the Collective Farm Girl’. The two figures represent two genders, two social classes (worker and farmer), but they are heading towards the same direction, which symbolizes the merging of the two parties and their way together in the future. The background shows typical iconography of socialist realist posters: a factory under construction on the left, which represents the rebuilding of the country and the working class, and the plowed land on the right, which symbolizes the peasantry.

This poster is considered to be a seminal work in Hungarian poster art. It is among the first socialist realistic posters in Hungary, which style became almost compulsory during the first half of the 1950s, except for some commercial, travel, theatre and circus posters, mostly designed for export purposes.