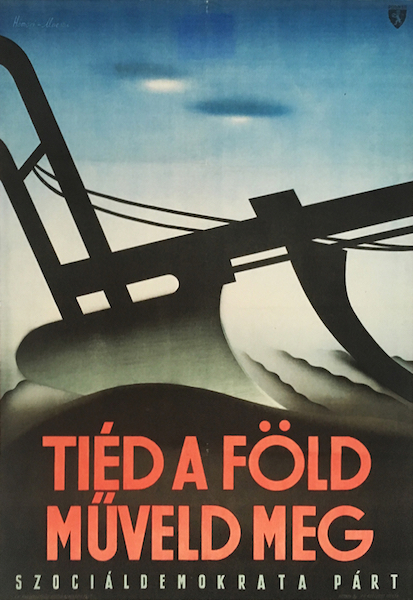 The land is yours, cultivate it - Social Democratic Party

The land is yours, cultivate it - Social Democratic Party is a 1945 propaganda poster designed by Gyorgy Hamori and Istvan Macsai.

The land is yours, cultivate it - Social Democratic Party is a 1945 vintage Hungarian political propaganda poster designed by Hamori and Macsai. It's purpose was to present the significance of the distribution of land and to bring political gain to the party for which, this has been a central goal for many years.

The Socal Democratic Party produced the most significant posters, and many great artists were commissioned by them. Among these, this great work is one of the most important, and was designed by Hamori-Macsai.

The 1945 land reform was ordered by the Temporary National Government on March 15, 1945. The poster was printed in the following weeks at the Posner printing house.

The plough displayed in a close total is a amazing, complex and compact visual representation, which is accompanied by an articulat, large, sans serif, red typography that was very ahead of its time. The text say: "THE LAND IS YOURS, CULTIVATE IT." The messages connects it to the land reform accepted on the 15th of March in 1945. Sowing and tilling, spike and wheat are closely related to this, as well as bread, the most basic food. These symbols have appeared on numerous posters in this period, because the citizens major issue was to establish the basic supplies for themselves and their families.

Nepszava, a leftist daily newspaper, published the following article in their March 31 issue in 1945:

"The question of the land reform on the sitting of the party. The leaders of the Social Democratic Party held a sitting on the 28th of March discussing the issues related to the land reform. Ferenc Szeder highlighted the huge work that should be conducted by the parties during the execution of the reform. Now, when a dream of decades, and our demands are coming true, we need to be present everywhere where advise, help, expertise or control is needed.

We have to distribute our people in the country, we have to participate in the work of the land claiming committees. We have to give the best and the most with full heart and soul in order to defeat the obstacles arising, and to get the most out of the order for the sake of the agricultural workers and the citizens of the country. Antal Ban called the attention of the party leaders to the necessity of the country's political mobilization.

The complete political picture of the country shows today that the people who got spiritually numb during the years of oppression, half or total fascism finds it hard to understand freedom, to understand the possibilities provided by democracy.

We have to shake the public view of the country up, we have to hold gatherings, and give posters and leaflets in the countryside. We have to make it clear for all workers of the country, that we are bulding a new world, and even if there are hardships, we should not get frightened. The Social Democratic Party has been claimng since its establishment, that the land should belong to the person who cultivates it.

Now we should go to the countryside, and make the peasants understand what 'The land is yours' really means, just like the freshly published, engaging poster of the party says. The leaders of the party were happy to incorporate the message to their ideology and they made a detailed plan regarding the practical sides of executing the land reform."