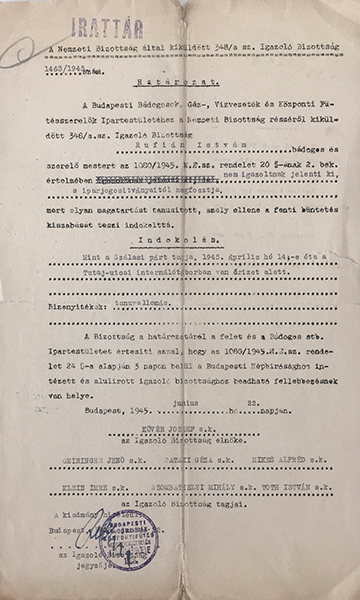 Fine. Horizontal and vertical fold marks, tears at the fold marks, creases at the corners and along the bottom and top border.

Resolution by the Budapest Craft Corporate of the Tinsmiths, Gas- and Watermen and Central Heating Men regarding Istvan Rufian's case is an Original Hungarian document from 1945. It declares that the subject doesn't have a right to own a licence for craftsmanship because he used to be a member of the Arrow Cross Party (Szalasi Party), according to the confessions of witnesses. On the back side a typewritten note is apparent: 'Hereby we are sending the resolution regarding Istvan Rufian tinsmith and handyman.

The Arrow Cross Party (Hungarian: Nyilaskeresztes Párt – Hungarista Mozgalom, literally "Arrow Cross Party-Hungarist Movement") was a Nazi party led by Ferenc Szálasi, which led a government in Hungary known as the Government of National Unity from 15 October 1944 to 28 March 1945. During its short rule, ten to fifteen thousand civilians (many of whom were Jews and Romani) were murdered outright, and 80,000 people were deported from Hungary to various concentration camps in Austria. After the war, Szálasi and other Arrow Cross leaders were tried as war criminals by Hungarian courts. (source: wikipedia.org)