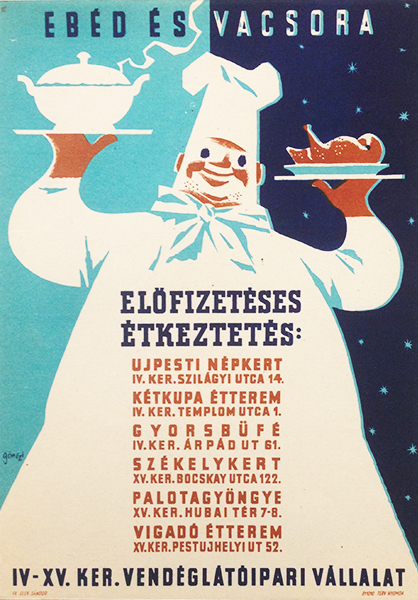 Lovely tram poster for promoting the possibility to subscribe for dinners in certain restaurants. To subscribe was more affordable than visiting restaurants on random occasions, therefore it was a motivational force for the everyday people.

The composition consists of the giant figure of a cook who is holding two dishes in his hands. The picture is split into night and day and the text on the top is written accordingly. On the lighter shade 'lunch', on the darker shade 'dinner' is written. For lunch the chef brings a hot souő and for diiner the offer is grilled chicken according to the poster. In the middle, on the belly of the chef the poster lists the restasurants where it was possible to subscribe for meals.

The designer of this piece was very famous and he'd spent long decades with designing posters. During the years his style was constantly changing. In the 1920s he created secessionist works and in the 1930s he shifted towards art deco. Then came the war when he prepared heroic posters for the Red Cross, and after the war he became engaged in political poster. In the 1950s he - just as everyone else - followed the rules of the socialist-realist style and in the 1960s he changed again and designed more playful posters. This one is a fine example of this period.