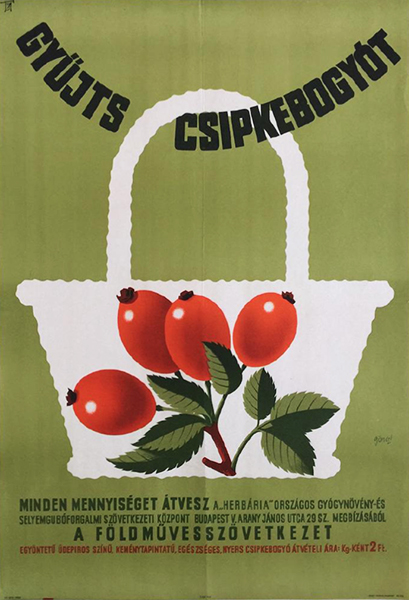 The poster intended to motivate people to take part in the collection of rosehips. According to the text, all rosehips collected were to be taken to the agricultural cooperative. The design is easy to understand. It depicts rosehips in a basket.

The rose hip, also called rose haw and rose hep, is the accessory fruit of the rose plant. It is typically red to orange, but ranges from dark purple to black in some species. Rose hips begin to form after successful pollination of flowers in spring or early summer, and ripen in late summer through autumn. Rose hips are commonly used as a herbal tea, often blended with hibiscus, and an oil is also extracted from the seeds. They can also be used to make jam, jelly, marmalade, and rose hip wine. Rose hip soup, "nyponsoppa", is especially popular in Sweden. Rhodomel, a type of mead, is made with rose hips. Rose hips can be used to make pálinka, the traditional Hungarian fruit brandy popular in Hungary, Romania, and other countries sharing Austro-Hungarian history. Rose hips are also the central ingredient of cockta, the fruity-tasting national soft drink of Slovenia. The fine hairs found inside rose hips are used as itching powder. Dried rose hips are also sold for primitive crafts and home fragrance purposes (source: wikipedia.org)