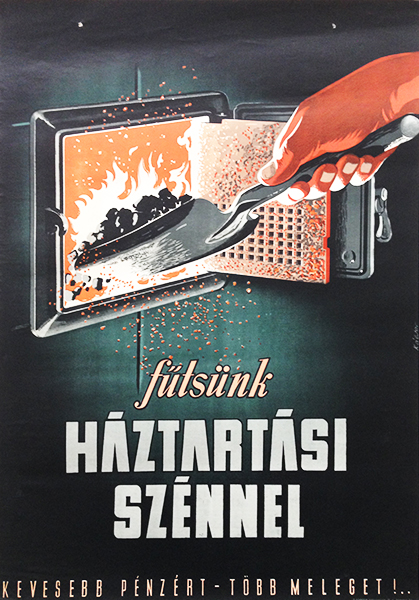 Fine, a very small tear at the bottom left border.

‘Let’s heat with household coal! More warmth for less money!...’ – commercial poster from the early 1950s. It was created by László Káldor.

Káldor was an important graphic artist and interior designer between 1935 and the 1960s. He is mostly known for his humorous and caricaturistic designs. In the 1930s his posters were influenced by the modernist-constructivist tendency of the interwar period, but after the World War II he joined to take part in the rise of political poster art. This movement was lead by György Konecsni, a prominent Hungarian poster artist, who influenced numerous poster artists of the time, including Káldor. Later in the 1950s, Káldor’s style became more and more playful and light-hearted.

In the beginning of the 1950s, however, artistic freedom was under constraint by political dictatorship in Hungary, in accordance with other Eastern European countries in the Soviet Union. The norms of Socialist Realism were obligatory, which meant that poster designers had to meet the requirements of socialist content and a realist manner. However, the system soon started to soften and after 1956 Socialist Realism lost its absolutism in the country.

This poster was also created in the first years of the decade, particularly in 1953. It was motivating the population to use household coal for heating with suggesting that it helps saving money, though it is more likely that coal was more available those times due to the emphasis on the heavy industry in the strong industrialization process.
The design shows the influence of the common political poster style of the second part of the 1940s, originated from Konecsni’s oeuvre, which was the second phase in Káldor’s poster designer activity. It is not without a good reason: after the installation of the political regime, it was easier to adapt to the new circumstances by employing this kind of visuality, because it could fit into the atmosphere of Socialist Realism. For instance, this poster depicts a realistic portrait of a male hand as it is shovelling coal into an oven. The fire-door is open, the fire is burning inside; even the hot, pitted inner layer of the fire-door is depicted. Although the portrayal is a bit stylized, the whole appearance is realistic enough to be accepted in the era. The scene is put on the upper section of the poster, while the script appears on the lower section of it in a simplified typographic design. Except for the simple red shades, the colours are low-keyed and greyish. The whole design is really easy to understand and it propagates the product with simple tools and motives, thus it could easily reach its target group, the peasantry and the working-class. This was one of the most important qualities of the popular political poster style of the late 1940s, and it remained the aim of the socialist realist propaganda posters of the early 1950s, too. However, this piece is more interesting than the general contemporaneous pieces due to its clear composition with massive shapes and elementary design.

This poster reveals Káldor’s tactic to fulfil the conditions of the time – being realistic, figurative and propagandistic – without over-idealizing, being falsely cheerful and heroic. It is an important piece as a historical document and as a piece of art as well.