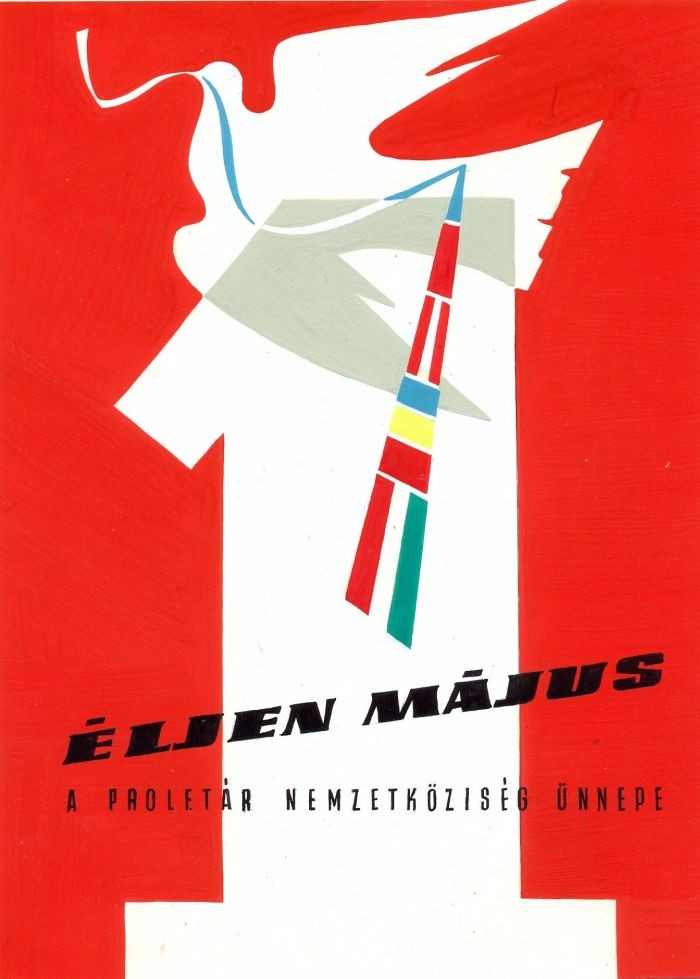 Interesting, painted poster artwork, created by Bertalan Altmann in 1957, for the socialist celebration of the 1st of May. It is the May Day or labour day even today, but for some years during the Socialist era in Hungary it was also the celebration of proletarian internationalism.

The posters of annual celebrations could sometimes be exceptions as we can find some examples of them with a more abstract design. This poster artwork is a decoratively modern piece with a big white number of 1 in the centre, a white figure of a pigeon, holding a ribbon in its beak, and a line of flags of countries from the former Eastern bloc. The background is coloured by the symbolic left-wing red. The composition is modern and concentrated with the few colours, elements and shapes used. The visual effect of the different shades used where elements cross contributes to the decorativeness of the design as well. The pigeon is a universal symbol of peace, the flags of Eastern bloc-countries represent the proletarian internationalism, celebrated on the 1st of May.

The use of symbolic elements together with political content makes the poster artwork an obvious propaganda work, but compared to the numerous ones of the former Rákosi-era with the forced socialist realist typical compositions and portrays of political leaders, this work is a good example of a skillful and strong visual design. Due to the fact that it was created for the socialist celebration of the 1st of May, the final poster could function as a cultural poster in the first place. Created one year after the revolution of 1956, this piece is also a special relic from the time of changes in Hungary’s history.