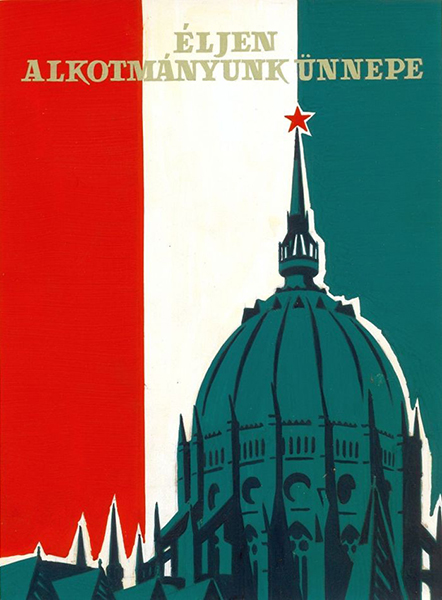 Impressive, painted poster artwork from the year of 1956, created by Bertalan Altmann. It promotes the former national celebration of the constitution which was held on the 20th of August.

This poster artwork is a decoratively simple and concentrated piece with the national colours in the background and the dome of the Hungarian Parliament in green in the foreground.

The Hungarian Parliament dates back to the end of the 19th century. There was a public tender in 1881 to find the perfect architectural design, and Imre Steindl, one of the greatest Hungarian architects of his time, was the winner with his plan. The final edifice was built until 1905 and it became the third largest Parliament building in the world, and the secong largest one in Europe. The building is located in Budapest, the capital city of Hungary, along the river Danube. Because of its location, it also became a symbol of Budapest, just as the British Parliament became symbol of London.

The dome of the Hungarian Parliament is the centric element of the building and one of the main spectacles of Budapest, too. It’s characteristic design is depicted in an expressive way on the poster artwork. The political symbol of the red star, which was put on the top of the institution during the Socialist era, also had to be captured on the poster artwork.

This work was created for the 20th of August which was originally and is nowadays the national and state celebration of Hungary. It is also the anniversary of the canonization of the first Hungarian king, I. Stephen, but during the Socialist era, between 1949 and 1989, these were replaced by the anniversary of the new constitution that the first political leadership of the period created.

Although the poster artwork was created for propaganda reasons, it could fit into the range of cultural posters too. What’s more, due to the stressed presentation of the emblematic building of the Hungarian Parliament, and of course with an other title, the final poster could also have functioned as a tourism poster of its time.