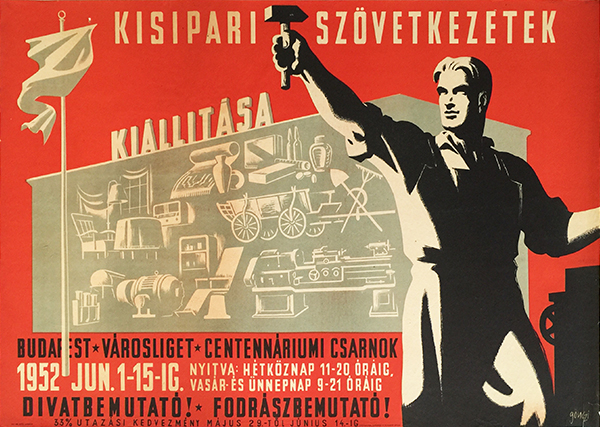 Original socialist realist propaganda poster from the early 1950s. It advertised the exhibition of small-scale cooperatives which was held in the Centenary Hall, City Park, Budapest. The exhibition could be visited 1-15 June, 1952. As the text claims, the exhibition also offered various programmes such as fashion and hairdresser shows.

The poster evokes the early socialist period in Hungary when several changes were initiated in the country by the one-time political dictatorship. The economy was completely reorganized and a centralised economy started. After the nationalization process every kind of individual production or work was ceased and a large number of cooperatives were established. According to the propaganda, it was voluntary, but in reality it was compulsory to join them. Thus everything could be supervised and controlled by the government. Cooperatives were created for agriculture, clothing, trading, and many others. The small-scale cooperatives included a large variety of professions.

This poster is strongly connected to the period not only in its content, but also in its graphical character, as it is a good representative of the socialist realist design of the age. The piece was created by Tibor Gönczi-Gebhardt who was a famous poster artist, productive from the 1920s until the end of the 1960s. His first posters were secessionist works, and then in the 1930s his style was influenced by Art Deco. During World War II he made heroic designs for the Red Cross, and afterwards he became engaged in the rising genre of political poster. In the 1950s he was a central figure in state propaganda. Socialist Realism was the key tool of the political dictatorship in their extensive propaganda activity in the first part of the 1950s, just as in other Eastern-European countries in the Soviet Union. The socialist content and the realist portrayal was a must, together with a mostly heroic or joyful atmosphere.

Gönczi could easily fulfil the requirements of the time with his realistic and easy to interpret works. This poster is a good example of that, and it contains a lot of basic elements of a socialist-realist design. Red colour dominates the poster with a muscular, massive male figure on the right in a uniform, lifting a hammer in the hand. He is gazing in the future determined as he is standing next to a machine. He is depicted as a classic socialist hero, the powerful working-class man, the builder of Socialism. A sickle can also be seen in the background in the representative selection of some iconic elements of small-scale production in a grey panel. The title appears above; the details are placed at the bottom of the design. But the work is also a concentrated composition with an elegant character. The use of a few numbers of colours, the strong black and white contrast in the figure, and the representation of several objects in different scales gives a more modern visual feature to the design. Therefore it could fit in the atmosphere of the era by employing the tools of the popular political poster style of the 1940s.

All in all, this work is a really interesting piece. It is a fine Gönczi-work, as well as a historic relic of the socialist propaganda. Exhibitions like the poster advertised and similar ceremonial events of the time were aimed to the show the successful operation of the cooperatives.