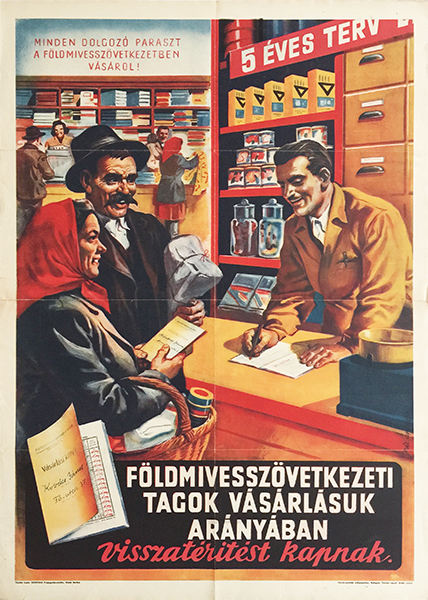 Every working peasant goes shopping to the agricultural cooperatives

Every working peasant goes shopping to the agricultural cooperatives. Members of the cooperative will get a partial refund

Propaganda poster for the agricultural cooperative. It has the typical elements of socialst-realist design: happy workers, large variety of goods on the shelves. On the shelf a text say five-year plan. After the Second World War the socialist government in Hungary had seven five-year plans within 20 years (besides a one-year and a three-year plan). These plans were all made with the goal of economic growth but it's needless to say that the forced industrialization and the actions related to agriculture caused more damages to the economy than good. Among the alternations the socialist government did to the economy was the completre rearrangement of agriculture. The cooperatives were established and the peasants had to join. In theory it was voluntary but in practice they had no other choice. The goal of making the cooperatives was that them the government could control and supervise everything thus independent production was suspended. The members of the cooperatives did not have their private properties and could not trade with the goods they produced the way they wanted. They had to hand in their goods to the cooperatives for a very low price. The people were told that all this is was for a good cause, for the homeland. The five-year plan was communicated the same way.

This poster alludes that if the workers spend their money at the cooperative store, they support the homeland by contributing to the five-year plan. And not only they will be happy just like the characters on the poster, but they will get a refund as well, if they are members of the cooperative. It all sounds very good, but  in reality socialism wrecked agriculture and peasant went bankrupt.

The author of this poster György Pál was mostly doing propaganda posters in socialist-realist manner.