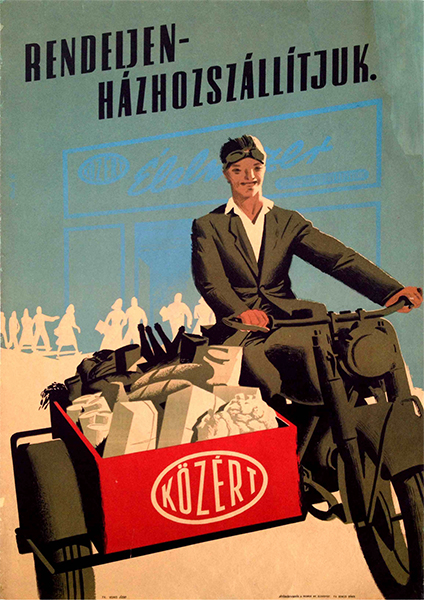 Supermarket - Order, and we'll deliver it to your home

The poster was created by Mátyás Sinka. The artist graduated from the Academy of Applied Arts in the 1950s, when he adopted the compulsory norms of Socialist Realism. Later he created numerous humorous and interesting posters for campaigns for prevention from accidents, promoting healthcare, traffic rules and anti-alcoholism, but he also worked for the state propaganda.
This piece is one of his early propaganda works. Although it was designed for commercial reasons, it can be considered as part of the propaganda due to the fact that the whole commercial market was nationalized and it was controlled artificially by the political leadership.

This work employs the obligatory realist portrayal with the greyish scale of terrene colours and the propagandistic message. A typical smiling figure is depicted driving a motorcycle full of packets and boxes. In reality, there was a huge lack of products these years, though.